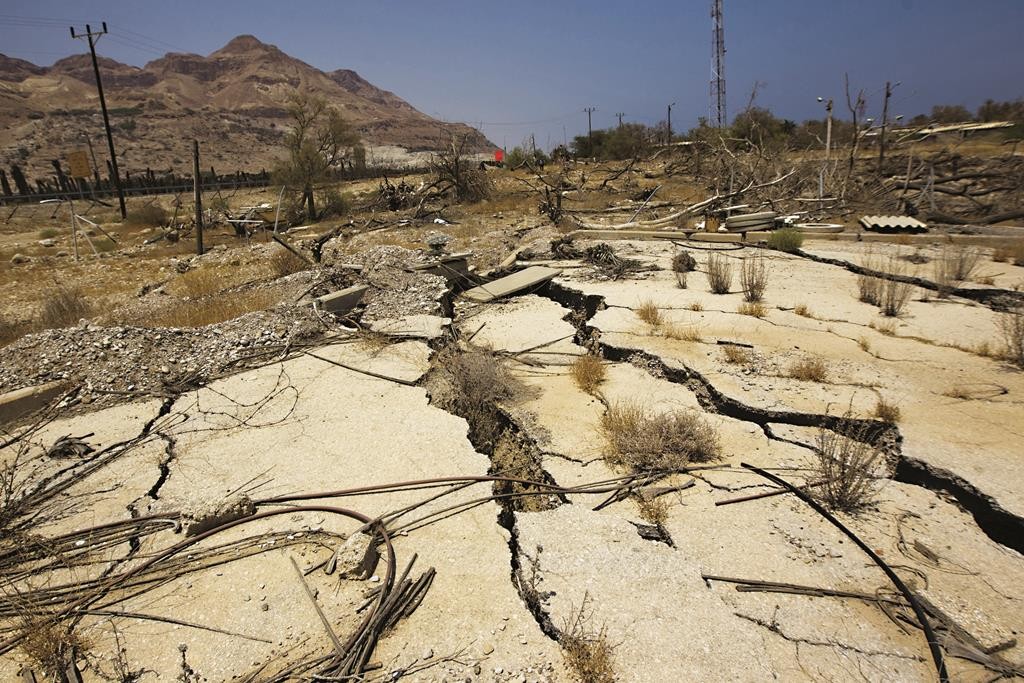 A neglected grove of date palms, their leaves long fallen, trunks drooping in the searing heat at the lowest point on earth, is the latest casualty of a dramatic rise in sinkholes wreaking havoc along the coast of the Dead Sea.

Workers had stopped tending the date grove, fearing the earth might swallow them up.

The Dead Sea is shrinking, and as its waters vanish at a rate of more than three feet a year, hundreds of sinkholes, some up to a hundred feet long, some two stories deep, are devouring land where the shoreline once stood.

Once a rarity, hundreds of new sinkholes are appearing every year, and the rate is expected to rise. Officials have not come up with a figure for the extent of the damage, but power lines have been downed and caravans and bungalows engulfed. On at least one occasion, hikers were injured falling into pits.

“It’s not a problem we can handle alone,” said Dov Litvinoff, mayor of the Tamar region that covers the southern half of the Dead Sea in Israel.

The main reason the sea is shrinking is because its natural water sources, which flow south through the Jordan River Valley from Syria and Lebanon, have been diverted for farming and drinking water along the way. Mining operations account for the remaining 30 percent of the deterioration, according to the Knesset’s research group.

Relocating infrastructure is a temporary solution, the mayor said. The sinkholes will only stop when the waters of the Dead Sea are restored, and that requires an international initiative, since it also borders Jordan.