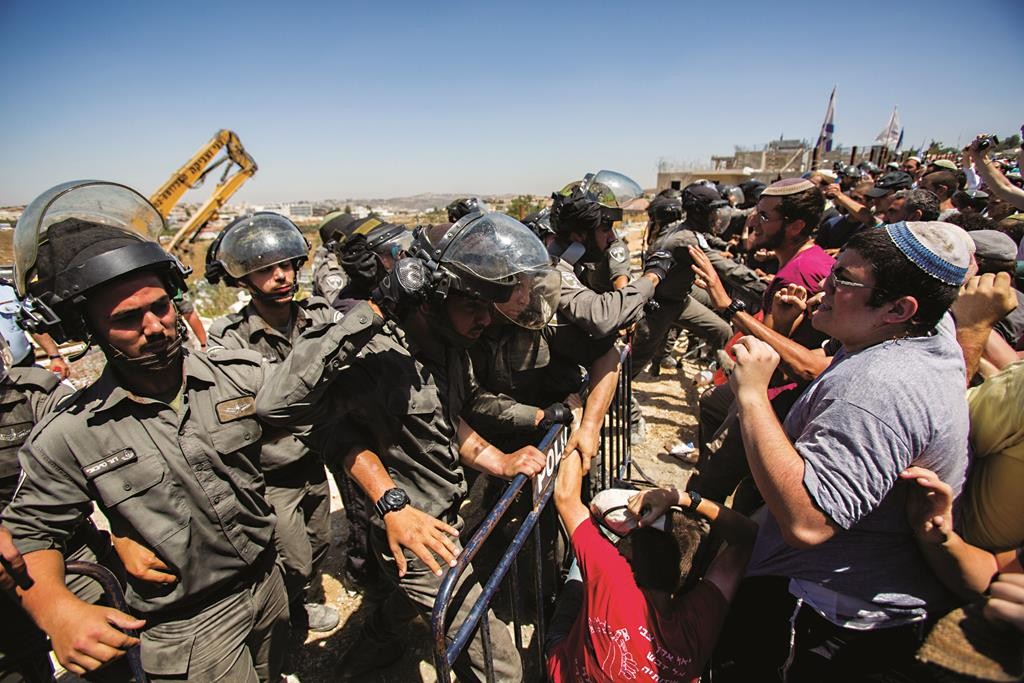 After days of angry confrontations that roiled the highest echelons of government, security forces tore down two structures in Beit El on Wednesday at noon, shortly after the High Court rejected the state’s appeal to stay the order, even after the necessary permits had been obtained.

The court ruled that the two partially-built dwellings were constructed illegally on Palestinian-owned land and ordered that they be demolished by midnight.

“Last week we got our final permission from the [IDF] Civil Administration, and then today we were supposed to go to the High Court to request that the discussion be reopened and that the demolition orders be canceled,” Judy Simon, a Beit El resident, told Arutz Sheva. “The two buildings have been through the entire process of all the proper channels for them to be legalized.”

Hundreds of local residents scuffled with the forces in an attempt to at least slow them down, but it was a lost cause. The police were in full control, having erected barricades and checkpoints on roadways leading to and from Beit El. Security forces were not permitting any vehicles to enter the area during the demolition. In the end, only a few arrests and minor injuries were reported.

Prime Minister Binyamin Netanyahu, facing the wrath of Jewish Home and many in his own party, said he opposed the demolition and had called on the Supreme Court to cancel the order, but no avail.

However, seeking to appease them and hold his shaky coalition together, Netanyahu announced that the government gave its approval for plans to build 300 new homes in Beit El.

It was not the first time, though.

In a similar episode three years ago, Netanyahu promised to build the 300 units as compensation for destroying several buildings in the community’s Givat Ulpana neighborhood.

A statement issued by the Prime Minister’s Office said the “immediate construction of 300 housing units” had been approved.

In addition, the statement said, planning approval was granted for the building of 413 homes in eastern Yerushalayim.

“In the early morning hours I spoke to the prime minister. I demanded that during the day, the government of Israel issue an official message to the High Court that it opposes the destruction of homes, and we’re following up on that now,” Bennett said.

There were some calls for Bennett to quit the government, but that did not seem to be in the offing.

Bennett welcomed the announcement of the 300 new units. “The court’s role is to judge; the government’s role is to build,” he said in a written statement. “We will build up the land of Israel, but in a legal and appropriate way.”

Not all of his colleagues in Jewish Home shared the sentiment.

MK Moti Yogev said in response that “we should ride up in D-9 bulldozers and raze the High Court to the ground.”

The Beit El local council was somewhat more restrained, saying that it was “astounded by the High Court’s obtuseness and the fact that it has ignored the permits that were presented to it.”

“It is very unfortunate that the High Court has sanctified a war against these homes and ignored basic logic,” the council said. “Nonetheless, we will respect the ruling, with great sadness.”

Opposition leader Isaac Herzog (Zionist Camp) came to the defense of the court.

“Bulldozers, coffins and shouted threats to the High Court from balconies and roofs, and Netanyahu remains silent … Wake up!” Herzog urged in an online statement.

MK Itzik Shmuly (Zionist Union) said that “the shovel of a D9 should be used to shut [Yogev’s] mouth.”

MK Michal Rosin (Meretz) wrote to Attorney General Yehuda Weinstein, demanding that Yogev be prosecuted for incitement: “Yogev’s statement is a violation of the law against fomenting public rebellion against the state. MK Yogev is endangering the democratic image of the state of Israel and should be put on trial for it.”

Several Border Policemen refused to take orders to demolish a series of homes destroyed in Beit El on Wednesday, a source at the scene told Arutz Sheva, and will now likely face jail time.

The Border Police denied the report.