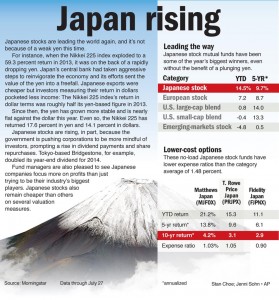 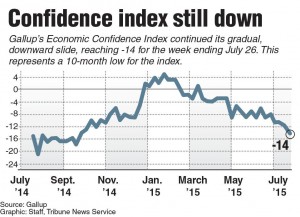 Global stocks steadied and U.S. markets marched higher Tuesday, as investors were encouraged by strong results from UPS, Ford and other big companies.

The recovery comes after five straight days of losses for U.S. indexes. It’s not uncommon for stocks to reverse course after several days in one direction, and investors say the market is still lacking the foundation for an extended rally.

UPS rose $4.82, or 5.1 percent, to $99.94. The company saw profits jump from a year ago, helped by stronger business overseas. UPS is sometimes seen as a proxy for the global economy because of its huge role in delivering goods all over the world on a daily basis.

Ford rose 28 cents, or 1.9 percent, to $14.83. The carmaker said profits jumped 44 percent in the second quarter, helped by higher global sales and higher prices for premium trucks and SUVs.

Ford and UPS are just a few of the more than 170 companies in the S&P 500 that report their results this week.

The Shanghai Composite Index closed down 1.7 percent, but had been trading down as much as 4 percent earlier in the day. Chinese stocks plunged 8.5 percent on Monday, the biggest drop since February 2007, despite concerted efforts by the Chinese government to stem the market’s slide. European stocks rose roughly 1 percent.

Traders were turning their attention to the U.S. Federal Reserve as they try to assess when interest rates will rise. Fed policymakers started a two-day meeting on Tuesday, but few central bank watchers expect a rate hike. Many expect the Fed to begin its next cycle of rate increases in September or December. Ultra-low interest rates have been a boon for stock and bond markets, and many questions remain about how markets will react to the first increase since the 2008 financial crisis.

In other markets, the price of U.S. crude rose for the first time in five days on expectations that supply reports this week could show a decline. Brent crude, a benchmark for international oils used by many U.S. refineries, continued to fall, however. Benchmark U.S. crude rose 59 cents to close at $47.98 a barrel in New York. Brent fell 17 to close at $53.30 a barrel in London.