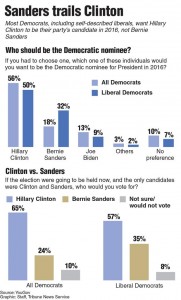 Hillary Clinton dodged questions Tuesday about her positions on trade and the Keystone XL pipeline, telling a New Hampshire voter that if the future of the project opposed by environmentalists remains “undecided when I become president, I will answer your question.”

Sensing an opportunity, Clinton’s rivals for the Democratic presidential nomination escalated their critique of the party’s front-runner. “It is hard for me to imagine how you can be serious about climate change and not oppose the Keystone pipeline,” Vermont Sen. Bernie Sanders told The Associated Press.

A day after laying out a sweeping plan to foster renewable energy and combat climate change, Clinton stuck with her refusal to say where she stands on the $8 billion pipeline. Environmental groups vigorously oppose the project, which would transport oil from Canada’s tar sands to refineries on the Gulf of Mexico, arguing it would contribute to global warming.

“My assessment is that it is not appropriate or fair for me to prejudge in a public area what Secretary (of State John) Kerry and President (Barack) Obama eventually have to decide,” Clinton said. “I will not do it. I’m sorry if people want me to.”

The former secretary of state also declined during a town hall-style meeting in the early voting state to take a firm position on the Trans-Pacific Partnership, noting her early work to lay the groundwork for the trade deal that labor unions and liberals oppose.

Clinton’s aides argue her work at the State Department is a major asset for her candidacy, even if it prevents her from taking positions on certain topics — such as Keystone and the Pacific trade deal — that are closely watched by the Democratic base.

As Clinton told New Hampshire voters in a steamy elementary school auditorium on Tuesday, “I’m in a very different position than any other candidate. I was there.”

This article appeared in print on page 11 of the July 29th, 2015 edition of Hamodia.