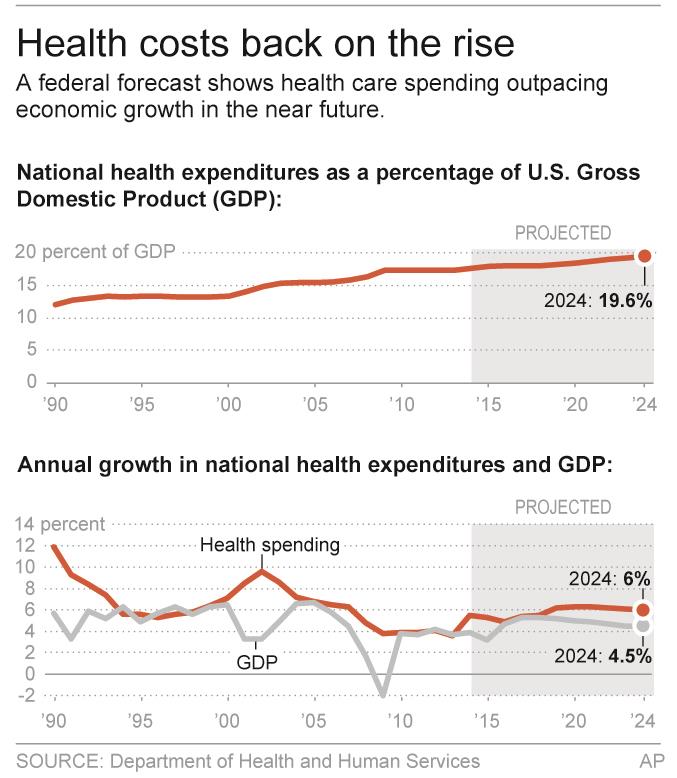 The nation’s respite from accelerating health care costs appears to be over.

Spending on health care will outpace the nation’s overall economic growth over the next decade, the government forecast on Tuesday, underscoring a coming challenge for the next president, not to mention taxpayers, businesses and individual Americans.

A combination of expanded insurance coverage under President Barack Obama’s law, an aging population, and rising demand will be squeezing society’s ability to pay.

By 2019, midway through the next president’s term, health care spending will be increasing at roughly 6 percent a year, compared to an average annual rise of 4 percent from 2008 through 2013.

The higher rate of increase is still “relatively modest,” says the report from the Office of the Actuary in the Health and Human Services Department. The forecast, through 2024, does not foresee a return to pre-recession days of torrid health care inflation, as the government and private employers try to revamp the way they pay hospitals and doctors to emphasize quality over quantity.

Even so, the report is “not great news,” said economist Douglas Holtz-Eakin, president of the American Action Forum, a center-right think tank.

“The main point is that the bill will continue to grow faster than the economy, which is what pays the bill,” he added. “The next president faces the task of reining in the growth of federal entitlement spending.”

“I do think this becomes something of a liability for anybody coming into office, and they need to have a very proactive policy to address it,” said Dan Mendelson, CEO of Avalere Health, a market analysis and consulting firm. Mendelson served in the Clinton White House as a health policy expert.

Growth in the nation’s health care tab slowed dramatically during the 2007-2009 economic recession.

Then came several years when health care increases tracked closely with the economy as it started to stir again.

As taxpayers, Americans benefited from the slowdown, which reduced projected Medicare costs. But many people saw their own medical bills rise, as employers shifted costs to workers.

Things changed in 2014, the report says, with coverage expansion under the new health care law. Some 8.4 million gained coverage that year, and people with health insurance use more medical services and prescriptions than do the uninsured.

At the same time, expensive new drugs that can cure hepatitis C are boosting spending on medications. In 2013, prescription drug spending rose by 2.5 percent. For 2014, the projected increase is 12.6 percent, according to the report. Hepatitis C is a viral infection that gradually destroys the liver, afflicting about 3 million Americans.

Spending on Medicaid, the federal-state health insurance program for low-income people, also has jumped. The 2013 increase was 6.1 percent. But the program is projected to have grown by 12 percent in 2014, again boosted by coverage expansion under the health care law.