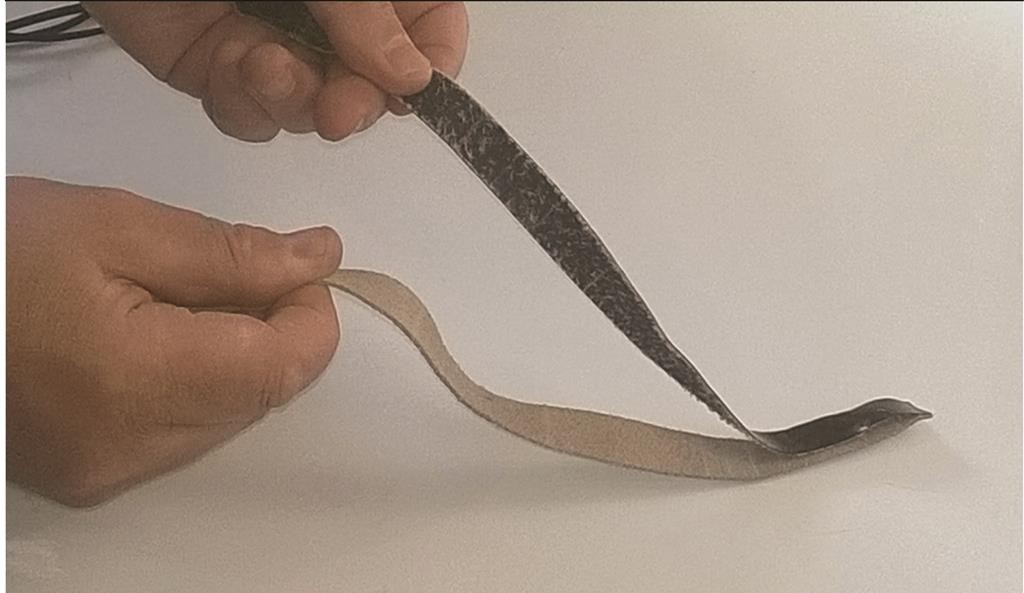 A recent discovery has revealed that many retzuos — leather straps used for tefillin — currently on the market are pasul and cannot be used to fulfill the mitzvah of tefillin. The unfortunate discovery has affected sofrim and producers of tefillin throughout the world, as well as thousands of Jews who have purchased them in recent years.

“It’s a real scandal,” Rabbi Dovid Leib Greenfield, founder and director of the Vaad Mishmeres Stam, told Hamodia. “Many experts in the field suspected this problem for some time, but now that it has been proven and brought out in the open, we can work on correcting it.”

According to halachah l’Moshe miSinai, laws that were told to Moshe Rabbeinu at Har Sinai, tefillin straps must be black. The accepted way of producing this result is to paint and sponge a type of dye directly onto the animal hide from which the strap is made. It is then coated with a layer of polish, giving the straps their shiny appearance. The process is a difficult one and must be done with great care, as well as with the intention that it is being done for the sake of producing kosher tefillin. This obviously adds significantly to the cost of production, which, as consumers know, is already quite high.

The falsified straps were produced with regular hides. However, their black shiny look was the result of a strip of plastic adhered using either heat or glue.

Within the last week, several of Gedolei HaRabbanim in Eretz Yisrael, including those of the Eidah Hachareidis and Hagaon Harav Nissim Karelitz, shlita, issued statements declaring the straps unarguably pasul, unfit for use.

The various letters state two problems. First, in order to be halachically suitable, the straps themselves must be black, which is not accomplished by the attachment of a separate item. Secondly, the presence of a foreign body besides the hide and dye is also cited as a cause to declare them pasul.

The announcements left many providers and consumers worried as to the kashrus of their tefillin straps.

“I made a bar mitzvah a few months ago and when this story came out, the sofer who made my son’s tefillin called me and said that it’s impossible to know which ones are problems and that I should be sure to get my son’s checked,” said a Williamsburg resident who asked not to be named. “He told me that if it turns out that they are pasul, he will replace them with kosher ones for free. That’s an ehrlicher sofer.”

The revelation has also raised several questions about how the public can tell if their tefillin are kosher and which straps to be wary of.

“These retzuos look very shiny and thicker than usual, more like black electric tape,” said Rabbi Shimon Zeidie of Bais Habatim, a retailer in tefillin, speaking with Hamodia. “One of my customers was nervous and brought his tefillin to me. I looked them over and saw that they were definitely okay.”

Experts in Eretz Yisrael reported to Vaad Mishmeres Stam that the problematic straps have only been on the market for the past two to three years and that the public need not be concerned about tefillin purchased previous to that.

Rabbi Zeidie said that the best method of testing is to place the ends of the straps in boiling water for a few minutes. If a layer peels off, it is a strong sign that one’s strap might contain the plastic strip. However, this, too, is not a sure sign and the tefillin should be brought to a reliable halachic authority.

“People should try to trace where their retzuos came from and under whose hashgachah they were produced. If it was done under a reliable, top-quality hashgachah, they should be fine,” said Rabbi Greenfield, a pioneer in establishing proper supervision for the production of STAM (sifrei Torah, tefillin, and mezuzah) products. He recommended that those who could not identify the source or were unsure of the quality of supervision should have the straps checked. Efforts to place retzuos under hashgachah first began in 1984.

“One thing that this whole story shows is how important it is for people to be aware of the importance of looking into the hashgachah of STAM products,” he said. “When some people hear about a scandal like this they lose faith in the whole industry. It is a very sad thing that happened, but people have to know that there are many Rabbanim and dedicated askanim who are working to make sure that the tzibbur has tefillin they can rely on.”