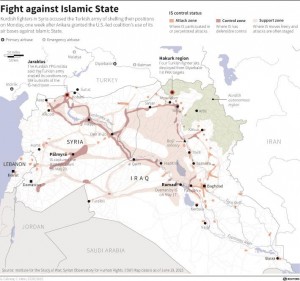 The United States and Turkey are finalizing plans for a military campaign to push the Islamic State terrorist group out of a strip of Syrian territory along the Turkish border, a move that would further embroil Turkey in Syria’s civil war and set up a potential conflict with U.S.-backed Kurdish forces.

A U.S. official said Monday that the creation of an “Islamic State-free zone” would ensure greater security and stability in the Turkish-Syrian border region. However, the official said any joint military efforts with Turkey would not include the imposition of a no-fly zone. The official insisted on anonymity because he was not authorized to publicly discuss the talks with Turkey.

The U.S. has long rejected Turkish and other requests for a no-fly zone to halt Syrian government air raids, fearing it would draw U.S. forces further into the civil war.

The discussions come amid a major tactical shift in Turkey’s approach to the Islamic State. After months of reluctance, Turkish warplanes started to strike terrorist targets in Syria last week, following a long-awaited agreement allowing the U.S. to launch its own strikes from Turkey’s strategically located Incirlik Air Base.

A Turkish-driven military campaign to push IS out of territory along the Turkish border is likely to complicate matters on the ground. Kurdish fighters in Syria control most of the 565-mile boundary with Turkey, and have warned Ankara against any military intervention in northern Syria.

In a series of cross-border strikes since Friday, Turkey has not only targeted the IS group but also Kurdish fighters affiliated with forces battling the terrorists in Syria and Iraq. The Syrian Kurds are among the most effective ground forces battling the IS group and have been aided by U.S.-led airstrikes, but Turkey fears they could revive an insurgency against Ankara in pursuit of an independent state.

This article appeared in print on page 1 of the July 28th, 2015 edition of Hamodia.