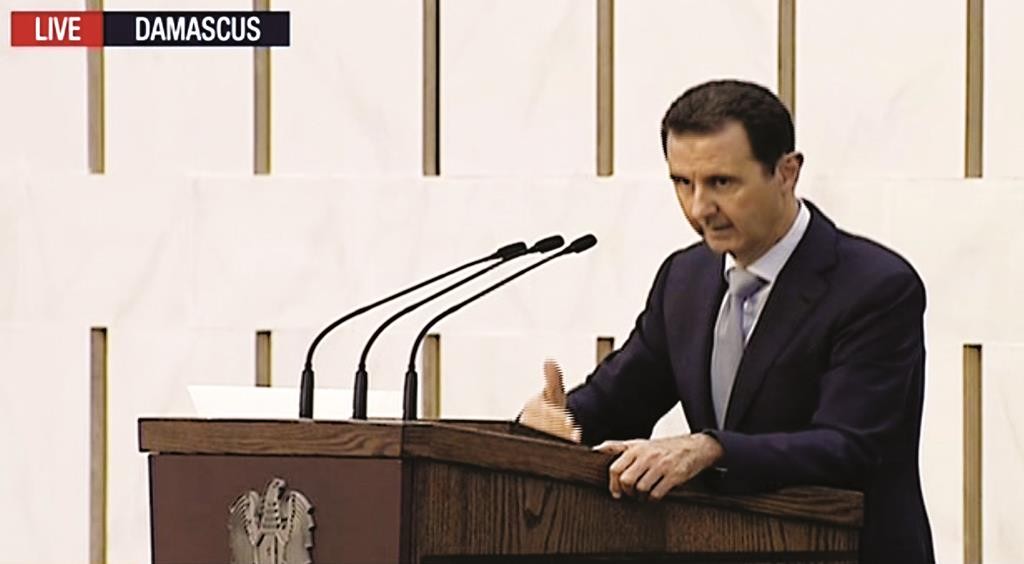 In his first public address in a year, embattled Syrian President Bashar Assad vowed Sunday to win his country’s long-running civil war while acknowledging his troops had lost territory to rebel forces and were running short on manpower.

Assad’s speech, while confident, came in the fifth year of a conflict pitting his forces against rebels, Islamist insurgents and the Islamic State terror group. Turkey, which has long backed the rebels, has begun striking the IS group and Kurdish fighters battling the terrorists, adding a new layer of complexity to a brutal war with no end in sight.

Assad’s speech Sunday morning, given to local dignitaries in the Syrian capital, Damascus, was his first public address since he was sworn in for a third, seven-year term in July last year. Assad has given interviews to several Arab and international media outlets in the meantime.

Assad acknowledged that his generals have had to move forces from one front to another in order to protect areas that are militarily, politically or economically more important. He added that the loss of some areas to insurgents has led to “frustration” among Syrians.

Syrian forces have suffered several setbacks since March, including the loss of the northwestern city of Idlib, the capital of a province that borders Turkey. In May, the government lost the historic central town of Palmyra to IS, who also captured parts of the northeastern city of Hassakeh.

Those losses could be partially offset by greater support from the government’s key ally, Iran, now that Tehran has agreed to a nuclear deal with world powers that would see international sanctions lifted.

“We are not collapsing. We are steadfast and will achieve victory,” said Assad, who was interrupted several times by applause. “Defeat does not exist in the dictionary of the Syrian Arab army.”

“There is a shortage of manpower,” Assad said, adding that “I don’t want to give a dark image that hostile media will use to say that the president is saying that people are not joining the army.”

Assad said that in recent months, mostly in April and May, the number of people joining the army has increased. He added: “Every inch of Syria is precious.”

The U.S. has begun training some moderate rebels who oppose Assad, but Islamic terror groups have had the most success against his forces. The Islamic State group holds about a third of Syria and neighboring Iraq in its self-declared “caliphate.”