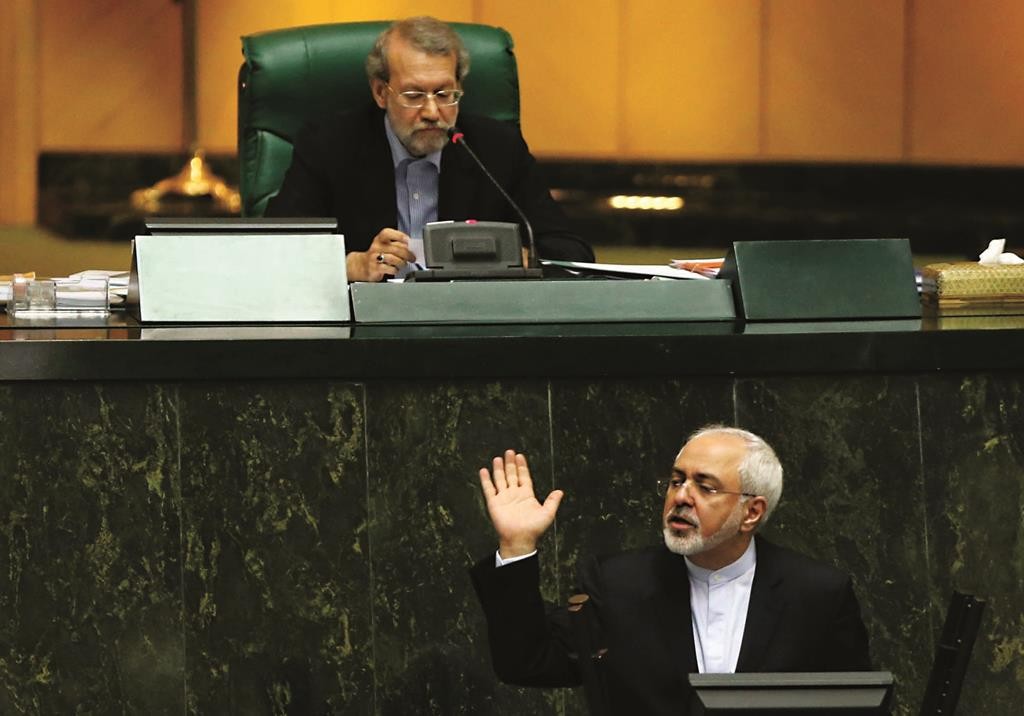 The United States said on Tuesday it was disturbed by anti-U.S. hostility voiced by Iran’s top leader after a nuclear deal, as both countries’ top diplomats sought to calm opposition to the accord from hardliners at home.

Secretary of State John Kerry said a speech by Iranian Supreme Leader Ali Khamenei on Saturday vowing to defy American policies in the region despite a deal with world powers over Tehran’s nuclear program was “very troubling.”

“I don’t know how to interpret it at this point in time, except to take it at face value, that that’s his policy,” he said in the interview with Saudi-owned Al Arabiya media channel.

“But I do know that often comments are made publicly and things can evolve that are different. If it is the policy, it’s very disturbing, it’s very troubling,” he added.

Ayatollah Ali Khamenei, the highest authority in Iran, told supporters on Saturday that U.S. policies in the region were “180 degrees” opposed to Iran’s, in a Tehran speech punctuated by chants of “Death to America” and “Death to Israel.”

Under the accord reached in Vienna last week, Iran will be subjected to long-term curbs on its nuclear program in return for the lifting of U.S., European Union and U.N. sanctions. The deal was signed by the United States, Britain, China, France, Germany, Russia and the EU.

It was a major policy achievement for both U.S. President Barack Obama and Iran’s pragmatic elected President Hassan Rouhani. But both leaders have to sell it at home to powerful hardliners in countries that have been enemies for decades.

In the case of Iran, the deal must win final acceptance from the National Security Council and ultimately Khamenei, who has so far withheld final judgment, thanking the negotiators while saying the text must still be scrutinized and approved.

In the United States, Republicans who control Congress have lined up against the deal, but Obama says he will veto any attempt to block it.

Hatred of the United States has been one of the underlying tenets of the Iranian ruling system since the 1979 Islamic revolution. But Iran’s nearly 80 million people voted overwhelmingly for Rouhani in 2013 on a promise to end the country’s diplomatic isolation.

Mohammad Javad Zarif, the foreign minister who developed a warm rapport with Kerry during weeks of unprecedented face-to-face talks, defended the deal in Iran’s hardliner-dominated parliament. He said most of Iran’s conditions had been met, including so-called “red lines” set by Khamenei.

Iran’s Revolutionary Guards and other hardliners have started to attack the deal directly, criticizing a U.N. Security Council resolution passed on Monday endorsing it.

They may be trying to persuade Khamenei to block the deal by presenting it as having violated the “red lines” he set, particularly by leaving in place for several years a U.N. arms embargo and restrictions on Iran’s missile program.

Ali Akbar Velayati, a senior advisor to Khamenei on foreign affairs, broke a long silence on Tuesday and said the deal was “not without flaws” although he did not reject it outright.

The prospect that sanctions will be lifted is spurring businesses to make plans to return to Iran.

In Paris, Laurent Fabius, who next week will make the first trip to Iran by a French foreign minister in 12 years, said having taken a hard line towards Tehran at the nuclear talks would not hurt France’s businesses once sanctions are lifted.

Fabius will travel without an entourage of business leaders, unlike Germany’s economy minister, Sigmar Gabriel, who took a large commercial delegation to Iran on Sunday as the first senior Western official to visit after the deal was agreed upon.

Gabriel’s haste drew some domestic criticism: “Our economy minister wanting to explore business opportunities for German companies a few days after the nuclear deal is a dangerous signal to the region,” said Paul Ziemiak, head of the youth wing of Chancellor Angela Merkel’s conservative bloc, during a visit to Israel.

“Our Israeli partners are irritated at how easily the crises and the problematic role of Iran in the region is overlooked.”