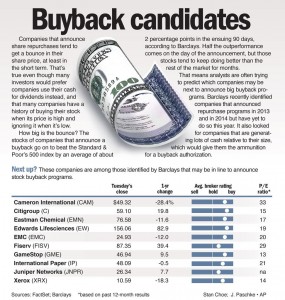 IBM and United Technologies were among the companies whose latest quarterly report cards fell short of Wall Street’s expectations or included dimmer outlooks. Telecommunications stocks were among the biggest decliners.

Traders have been focusing on the health of Corporate America to get a read on how the global economy is doing, though it’s still early days. Only about 12 percent of the companies in the Standard & Poor’s 500 index have reported earnings so far.

“Investors appear to be in a listen-only mode as we await greater clarity on second-quarter results,” said Terry Sandven, chief equity strategist at U.S. Bank Wealth Management. “Our belief is that equities still grind higher, but we’re in a sideways-trending mode here into August and perhaps even in the early part of September as well.”

The three major stock indexes remain up for the year.

Nine of the 10 sectors in the S&P 500 index declined, led by a 1.7 percent drop in telecommunications stocks. Energy stocks rose slightly.

Stocks headed lower early on Tuesday as investors reacted to IBM’s latest quarterly results, released late Monday. The market stayed in the red the rest of the day.

IBM delivered better-than-expected earnings, but its revenue fell short of financial analysts’ forecasts. The stock slumped $10.15, or 5.9 percent, to $163.07.

On Tuesday, United Technologies reported earnings that didn’t meet forecasts. The aerospace company also cut its outlook for 2015, citing weaker sales of Otis elevators in Europe and China’s slowing economy. The stock lost $7.77, or 7 percent, to $102.71.

Verizon Communications also declined. While its earnings topped Wall Street’s expectations, the number of newly added wireless postpaid customers was down from last year. Verizon fell $1.13, or 2.3 percent, to $46.97.

Investors found some companies’ earnings made them buy-worthy.

Apple fell in after-hours trading after the company reported strong iPhone sales but revealed little about how sales of its new smartwatch were doing. The company also issued a forecast for the current quarter that suggested revenue could fall below analysts’ estimates. Apple slid $8.45, or 6 percent, to $122.27.

Microsoft fell 3 percent in extended trading. The company, which also released its results after the closing bell, booked an $8.4 billion expense to write off the Nokia phone business it bought just over a year ago.

Excluding results from energy sector companies, second-quarter earnings by companies in the index are projected to be up 4.5 percent, however.

• LifeLock plunged 49.3 percent after the Federal Trade Commission accused the identity theft protection company of misleading customers about the level of protection and the timeliness of the warnings they will receive. The agency also contends that LifeLock isn’t living up to a previous $12 million settlement with regulators. The company said it is prepared to defend itself in court. The stock slid $7.91 to $8.15.

• Chesapeake Energy fell 9.5 percent on news that the energy company has axed its annual dividend and will redirect the money into its 2016 capital spending program. The move comes as natural gas and crude are in an extended decline with few signs of a rebound. The stock lost 98 cents to $9.29.