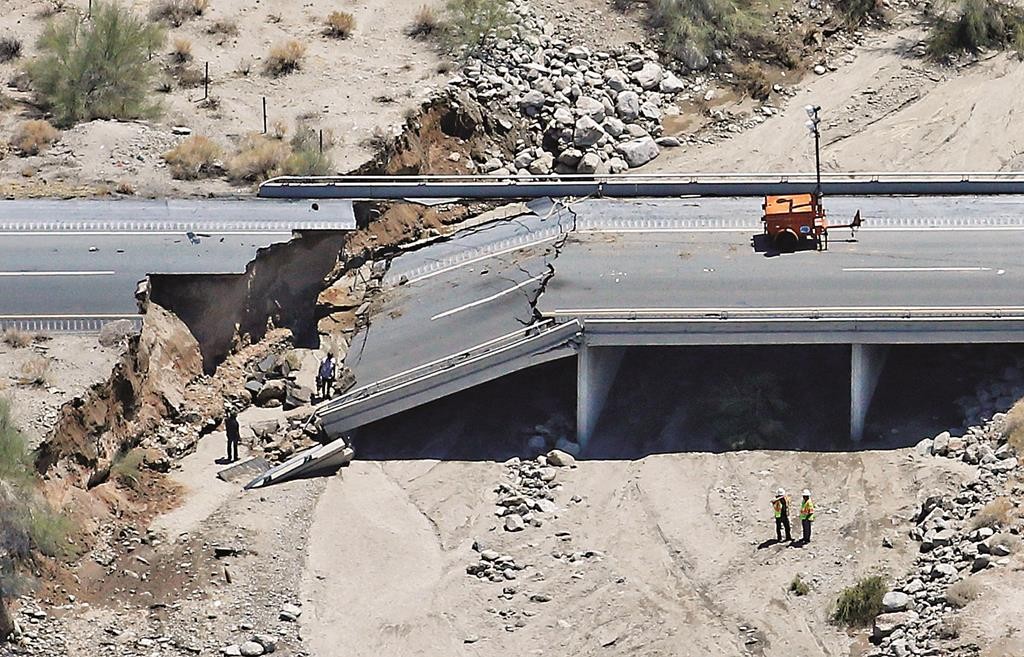 The damage to interstate highway bridges from flash flooding in Southern California’s desert over the weekend proved more widespread than initially thought, with construction crews working Tuesday to reinforce spans over three gullies.

In light of the damage, some outside engineers warned that the California Department of Transportation may need to adopt tougher design and protection standards for highway bridges, particularly with abnormally heavy rains possible in the coming months because of a weather phenomenon known as El Nino.

Flooding touched off by unusually intense rainfall of nearly seven inches Sunday washed away boulders and soil under an elevated portion of Interstate 10 near the town of Desert Center, about 50 miles from the Arizona state line, causing the collapse of the eastbound side of the bridge and severely weakening the westbound side.

One person was hospitalized with broken ribs, a shattered knee and lacerations to his liver, and the main highway between Los Angeles and Phoenix was severed, forcing 54,000 daily vehicles to take a several-hours detour.

After the collapse, California Department of Transportation (Caltrans) inspectors found erosion under two other I-10 bridges a few miles to the west, and workers labored to reinforce all three spans by pouring more concrete and replacing the protective boulders that were swept away, said Mike Beauchamp, a Caltrans deputy district director.

Authorities hope to reopen the westbound lanes around the collapse site to two-way traffic within weeks. Reconstruction of the fallen eastbound span will take longer.

Caltrans said the span would have withstood the flooding if the water had barreled down the middle of the natural channel, but its path shifted, as can happen in the desert, concentrating its full force on the western bank. The soil in that area cannot absorb that much water quickly.