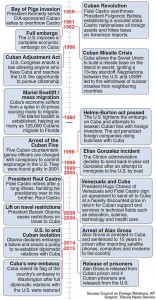 The Cuban flag was raised over Havana’s embassy in Washington on Monday for the first time in 54 years as the United States and Cuba formally restored relations, opening a new chapter of engagement between the former Cold War foes.

Cuban Foreign Minister Bruno Rodriguez presided over the reinauguration of the embassy, a milestone in the diplomatic thaw that began with an announcement by U.S. President Barack Obama and Cuban President Raul Castro on Dec. 17.

Underscoring differences that remain between the United States and communist-ruled Cuba, Rodriguez seized the opportunity to urge Obama to use executive powers to do more to dismantle the economic embargo, the main stumbling block to full normalization of ties.

For its part, the Obama administration pressed Havana for improvement on human rights.

But even with continuing friction, the reopening of embassies in each other’s capitals provided the most concrete symbols yet of what has been achieved after more than two years of negotiations between governments that had long shunned each other.

In a further sign of a desire to move past a half-century of enmity, Secretary of State John Kerry later hosted Rodriguez, the first Cuban foreign minister to visit Washington since the Cuban Revolution, for talks at the State Department.

Obama has eased some business and travel restrictions but the broader 53-year-old embargo remains in place.

Only Congress can lift it, something majority Republicans are unlikely to do anytime soon despite the Democratic president’s appeal for it to be rescinded.

This article appeared in print on page 1 of the July 21st, 2015 edition of Hamodia.