Toyota’s Next Prius Is Unlikely to Boost Sagging Hybrid Market 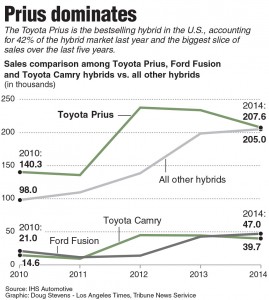 The next Toyota Prius will arrive just as hybrids seem to be going out of fashion.

Set to debut this fall, the 2016 version of the groundbreaking green car leads a segment beset by falling gas prices and the rising efficiency of conventional gasoline cars.

The fourth-generation Prius, analysts say, will have to be an extraordinary car to match its previous successes, and it’s unlikely to breathe new life into the flagging hybrid segment.

In many ways, the Prius is the hybrid segment. Last year, Toyota sold 207,635 of the three combined Prius models, accounting for 42 percent of the hybrid market, according to IHS Automotive.

It’s by far the bestselling hybrid in U.S. history, having sold more than 1.8 million units since its debut as a 2001 model. It has, in recent years, often been the bestselling car of any kind in California.

But Prius sales this year are off 15.8 percent from 2014, according to industry research firm Autodata Corp., a figure that mirrors falling sales for all hybrids.

Toyota has so far said little about the 2016 model, but the automaker has acknowledged a few key facts: It will be in dealerships by year’s end, come first in hatchback form only — with wagon and compact versions to arrive later — and look more like a conventional sedan.

It will drive more like one, too, with sharper handling, according to Toyota. Fuel economy will improve by about 10 percent, to more than 55 mpg.

Is that enough? Some analysts say it isn’t — because hybrids generally cost more than conventional vehicles, and because fuel economy alone isn’t drawing consumers as it did when gas prices were high and threatening to go higher.

“This segment struggles because of the economics,” said Stephanie Brinley, an analyst with IHS Automotive. “With gas prices staying low, it becomes even more difficult to … make back the higher price of a hybrid in fuel savings.”

To increase sales, Toyota will have to convince buyers that the Prius is a great car that just happens to get great mileage.

“If Toyota cannot present this as an attractive, fun-to-drive, high-quality vehicle that oh-by-the-way also gets 60 miles to the gallon, it will not be successful,” Brauer said. “If the biggest selling point is the fuel numbers on the window sticker, that won’t get it done.”

With the Prius, Toyota once cornered the high-mileage market. When the second-generation Prius debuted as a 2004 model, its rating of 46 mpg in combined city and highway driving seemed an impossible engineering feat. A similarly sized Mazda3 compact of the day got only 26 mpg.

The biggest challenge, however, may come from traditional gasoline-powered cars, which have made big strides in efficiency as automakers work to meet rising federal fuel-economy standards.

Many automakers now offer conventional vehicles that get 40 miles to the gallon on the highway. The 2015 Prius gets a combined 50 miles per gallon, while the Mazda3’s number has risen to 34.

A fuel-efficiency rating of 55 mpg for the next Prius would still be impressive. “But you’re giving up something in terms of comfort, performance and interior space” with a hybrid, Brauer said.

Toyota has not announced pricing for the Prius. Analysts believe the new model will be priced close to the current model, or about $25,000 to $31,000, depending on options.

That’s a good bit more than, for instance, a comparable Honda Civic.

In another sign of waning demand for hybrids, Toyota has been offering heavy discounts to move the current-model Prius off dealer lots. At least one Los Angeles dealer has offered hatchback versions recently for less than $20,000, according to the car-buying website Truecar.com.

The 2016 Prius will probably command substantially more as a redesigned model. It may also offer more luxury and technology in a package that’s more like a traditional sedan, said analyst John O’Dell of Edmunds.com, the auto-information company.

“This car will look more like an alternative family vehicle,” O’Dell said. “That means they may be able to raise the price range, since they can include more features in a sedan.”

The future of all hybrids remains tenuous. Sales seem stuck in a small niche, despite substantial investments in engineering and marketing of hybrids by nearly every automaker. Some automakers have even offered hybrid models at the same or only slightly higher prices than their conventional gasoline equivalents.

But the Prius and dozens of other hybrids — most of them converted versions of conventional models — amount to only about 2.5 percent of all U.S. auto sales.

If the next Prius can’t grow sales, that won’t bode well for hybrids from other brands.

“If the Prius cannot be successful this time around,” Brauer said, “I don’t know how any hybrid can be successful.”

Unless, of course, gas prices rise.

“You are always one fuel-price spike away from (consumers going back to) alternative-fuel vehicles,” said Ford sales analyst Erich Merkle, whose company makes the C Max and Fusion hybrids.