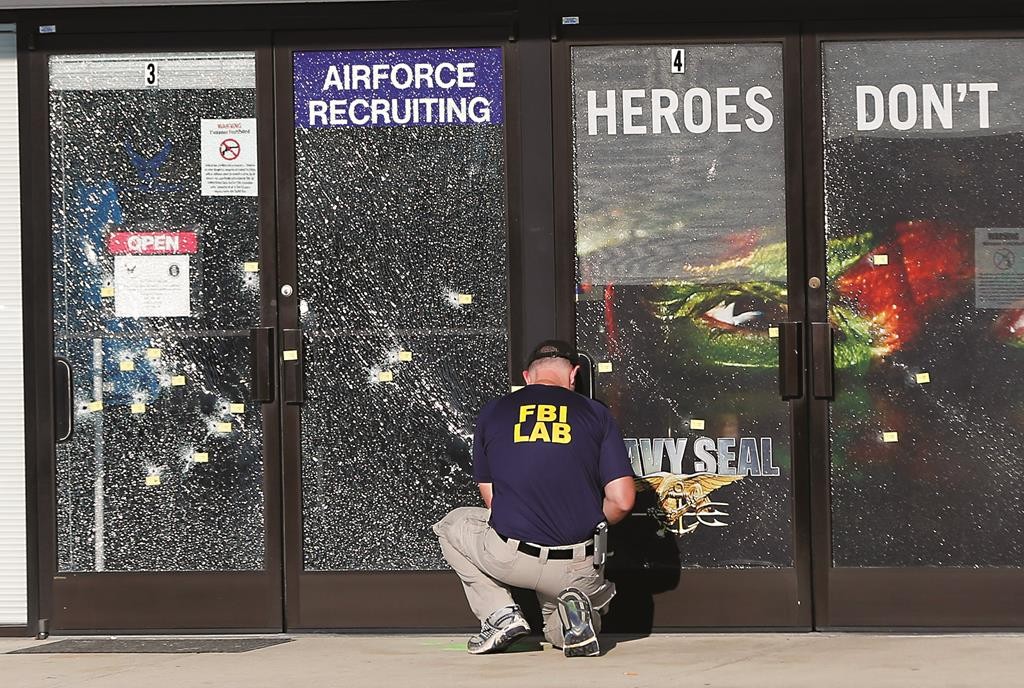 On the day the death toll from the shooting rampage rose to five, thousands of people in this city still reeling from Thursday’s violence crowded outside the center and at the other shooting site, a nearby recruitment center in a strip mall, to pay tribute to those who died.

A steady convoy of pickup trucks, Jeeps and sedans streamed through the narrow two-lane entrance to the strip mall that houses the Army recruitment center, with many passengers waving U.S. flags, affixing balloons to ornamental plum trees, Marine Corps flags to stop signs and bunting to lamp posts.

Jon Wilke, 39, a media producer from Nashville who spent four years in the Marine Corps, stared across a long line of yellow sheriff’s tape as an investigator examined the center’s bullet-ridden glass windows.

“It’s a first stop on the journey to become a Marine,” he said of the building. “It’s a starting place for heroes. We don’t expect it to be a place of violence and death.”

Police say Muhammad Youssef Abdulazeez, 24, opened fire at the two military-related locations in Chattanooga on Thursday, shooting seven people, five of whom have died, in what officials are investigating as a terrorist attack. Abdulazeez was killed during a firefight with police at the Navy Operational Support Center, about seven miles from the recruiting center.

Jason Pack, an FBI special agent, said Saturday that Evidence Response teams from the FBI Knoxville, Atlanta, and Memphis offices and experts from the FBI Laboratory continue to process the two shooting scenes. He said more than 200 responses have poured into a tip line.

Investigators are still trying to determine a motive for the attacks, and are concentrating on a trip Abdulazeez took to Jordan and his activities on the internet. The incident is being investigated as a terrorist attack, but no ties to foreign extremist groups have been found.

Abdulazeez was also facing other pressures, including a July 30 court appearance on a charge of driving while under the influence.