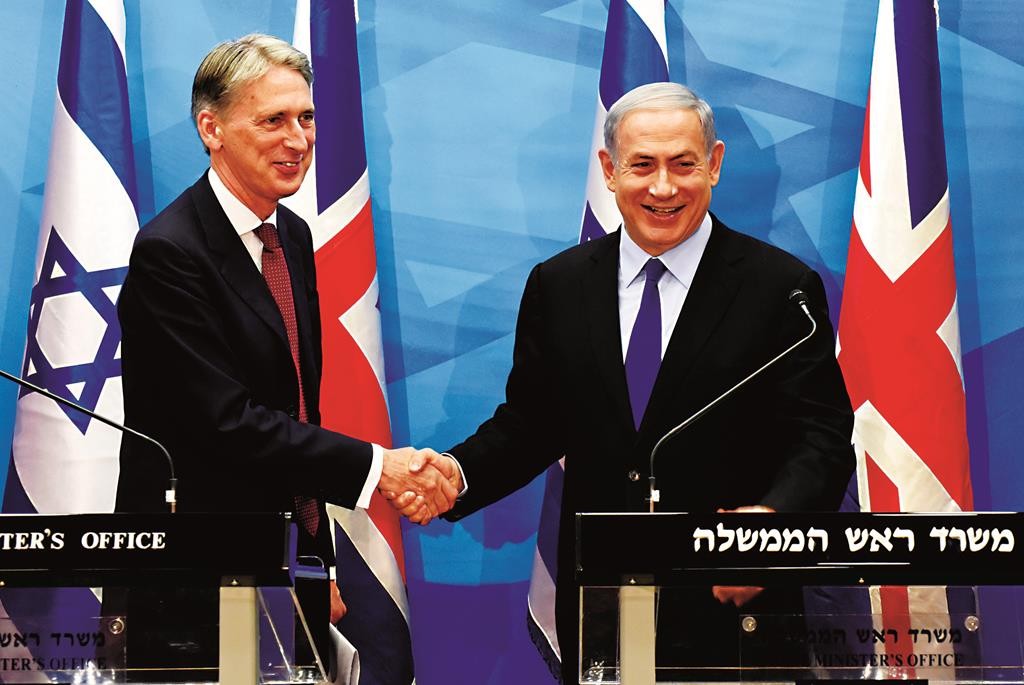 Israeli Prime Minister Binyamin Netanyahu and British Foreign Secretary Philip Hammond confronted each other over the Iran nuclear deal during a joint press conference in Yerushalayim on Thursday.

Hammond’s visit came a day after he dismissed Israeli criticism of the accord, asserting that it was impossible to craft any agreement that would have satisfied the Israelis.

Netanyahu again attacked the deal not just on details of compliance but on basic principles.

“It cannot be that an unreformed, unrepentant Iran, that seeks continuously to wipe us off the map, dispatches killers to kill our people — and not only our people…is given the sanctions relief, is given the removal of limitations on its nuclear program, without changing its genocidal policies against Israel, its terrorist activities in the region and beyond the region, its commitment to exporting the Islamic revolution throughout the world,” said Netanyahu.

Netanyahu also disputed Hammond’s statement that sanctions relief will be contingent on Iranian compliance with the terms of the deal, contending that “there is no requirement for Iran to change its behavior and that’s what makes this deal fundamentally wrong.”

When challenged on why the UK did not condemn Iran for its annual “Death to America! Death to Israel!” rally last Friday, Hammond replied:

“We will judge Iran not by the chants on the streets of Tehran, but by the actions of its government,” Hammond answered.

Netanyahu countered that Iran’s rhetoric of hate is backed up by hundreds of thousands of missiles pointed at Israel, which constitute “actions” of the Iranian government.

Echoing President Barack Obama’s line in Washington on Wednesday, Hammond acknowledged Israel’s legitimate concerns, but maintained that “we would not have agreed to the deal unless we were sure we had robust measures in place to control Iran’s nuclear program.”

“Despite our different views, I urge Israel to work with the UK to ensure the deal’s fully implemented and effectively monitored,” Hammond said, an apparent reference to Netanyahu’s declaration that Israel would not be bound by the accords.

In response to Obama’s repeated assertion that critics of the deal have failed to offer an alternative, a senior Israeli official was quoted by The Times of Israel on Thursday:

“We have consistently laid out an alternative, which is a better deal that actually blocks Iran’s path to the bomb and links the lifting of restrictions on Iran to tangible changes in Iranian behavior.”

The official also disagreed with Obama’s argument that it would have been impossible to hold the international sanctions regime against Iran in place.

“We don’t believe that sanctions would collapse; on the contrary,” the official said, “we sincerely believe that the sanctions can be maintained in place, if there is American leadership on this matter.”

He also took issue with Obama’s claim that “99 percent of the world community” supports the new deal.

“The entire international community is not backing the deal. There is a lot of opposition to it, especially from countries in the region,” the official said. “Iran’s neighbors — those who know Iran best — are united in opposition to it.”