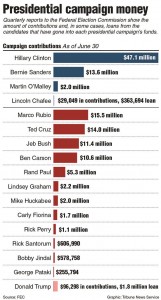 The major parties’ top presidential candidates in the fundraising race — Democrat Hillary Rodham Clinton and Republican Jeb Bush — are collecting cash in the huge amounts needed to fuel the extensive political organizations they are building for the 2016 campaign.

Their financial backers have poured more than $176 million into their campaigns and the super-PACs specially designed to boost them.

Clinton’s campaign is spending money at a rapid clip, according to initial fundraising reports filed Wednesday with federal regulators. The former first lady and front-runner in the Democratic race has paid out 40 percent of the $47 million in donations that she amassed by the end of June, employing some 364 people and building infrastructure across the country in preparation for next year’s general election.

Bush, the former Florida governor and son and brother of ex-presidents, spent more than one-quarter of the $11.4 million in fundraising that he collected in the final 16 days of June.

The Federal Election Commission reports cover financial activity between April 1 and June 30. The maximum contribution for the primary is $2,700. Yet a candidate’s own campaign is just one page in the money story.

Super-PACs, which are required to file similar documents at the end of the month, can accept contributions of any size. They’re limited on how closely they can work with the campaigns but are often staffed with close confidants of the candidates.

This article appeared in print on page 3 of the July 17th, 2015 edition of Hamodia.