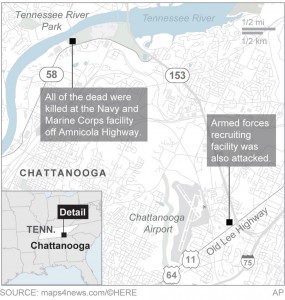 A terrorist unleashed a barrage of fire at a recruiting center and another U.S. military site a few miles apart in Chattanooga on Thursday, killing at least four Marines, officials said. The attacker was killed.

A U.S. official speaking on condition of anonymity identified the gunman as 24-year-old Muhammad Youssef Abdulazeez of Hixson, Tennessee, and said he was believed to have been born in Kuwait, though it was unclear whether he was a U.S. or Kuwaiti citizen.

“Lives have been lost from some faithful people who have been serving our country, and I think I join all Tennesseans in being both sickened and saddened by this,” Gov. Bill Haslam said.

Within hours of the bloodshed, law officers with guns drawn swarmed what was believed to be Abdulazeez’s house, and two females were led away in handcuffs.

The suspect, seen driving an open-top Ford Mustang, is believed to have first gone to a joint military recruiting center in a strip mall and sprayed it with gunfire, riddling the glass facade with bullet holes.

“Everybody was at a standstill and as soon as he pulled away everyone scrambled trying to make sure everyone was okay,” said Erica Wright, who works two doors down from the center.

The gunman then drove off to a Naval Reserve Center about 6 miles away, fatally shooting the four Marines before being shot and killed in a firefight with police.

Three others were wounded in the attacks, including a police officer reported in stable condition and a Marine.

The shootings began at about 10:45 a.m. local time and ended about 30 minutes later.

In Washington, Vice President Joe Biden vowed: “We will get to the bottom of it.”

“Their families have already given a lot to the country,” he said, “and now this.”

This article appeared in print on page 1 of the July 17th, 2015 edition of Hamodia.

Donald Trump ‘Took the Fifth.’
What Does It Actually Mean?