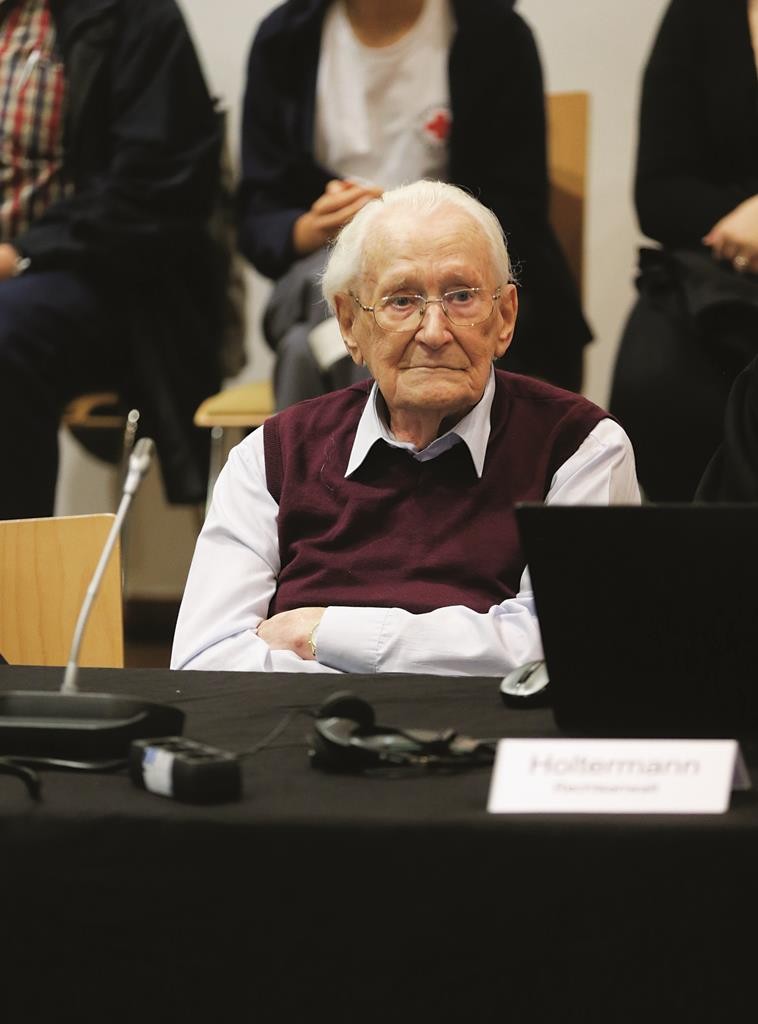 Oskar Groening confessed during his trial to feeling “moral guilt” for serving as an SS sergeant at Auschwitz. On Wednesday, a court ruled that he was guilty of being an accessory to the murder of 300,000 Jews and sentenced him to four years in prison.

The 94-year-old, who testified that he oversaw the collection of prisoners’ belongings and ensured valuables and cash were separated to be sent to Berlin, listened expressionlessly to the verdict after a 2 1/2-month trial that could set a legal landmark.

The verdict, and presiding Judge Franz Kompisch’s thorough and impassioned detailing of the Lueneburg state court’s ruling, renewed hope of more 11th-hour prosecutions of former members of the SS who served at death camps — no matter their age.

“This verdict was critical, because this is the first case brought where the prosecution charged a person who wasn’t involved in the physical side of mass murder,” said the Simon Wiesenthal Center’s head Nazi hunter, Efraim Zuroff, in a telephone interview from Belgrade.

Kompisch acknowledged that Groening was born in a different time, growing up after World War I in Germany in a right-wing nationalist family, in a society where Jews were portrayed as a danger to the country. However, he said Groening joined the SS of his own volition when he had many other options.

“You didn’t want to stand on the sidelines,” Kompisch told Groening, who listened attentively for more than an hour and a half as the judge detailed the ruling, occasionally sipping from a bottle of water. “You wanted to be there.”

In his job at the death camp, for which he has been dubbed the “bookkeeper of Auschwitz,” Kompisch said Groening was part of the “machinery of death,” helping the camp function and also collecting money stolen from the victims to help the Nazi cause.

Groening walked out of the courtroom after the verdict without talking to reporters.

The charges related to a period between May and July 1944 when hundreds of thousands of Jews from Hungary were brought to the Auschwitz-Birkenau complex in Nazi-occupied Poland. Most were immediately gassed to death.

Unusually for trials of former Nazi camp guards, Groening was open about his past throughout the 17 days of hearings.

In their verdict, judges went beyond the 3 1/2-year sentence prosecutors sought. Groening’s defense team had argued for acquittal, contending that as far as the law is concerned he did not facilitate mass murder.

Kompisch said Groening deserved respect for having been open about what he did and having testified, but that given the enormity of the crime it would have been inappropriate to impose a lower sentence.

Both sides have a week to appeal, and both prosecutors and the defense said they would consider whether to do so.