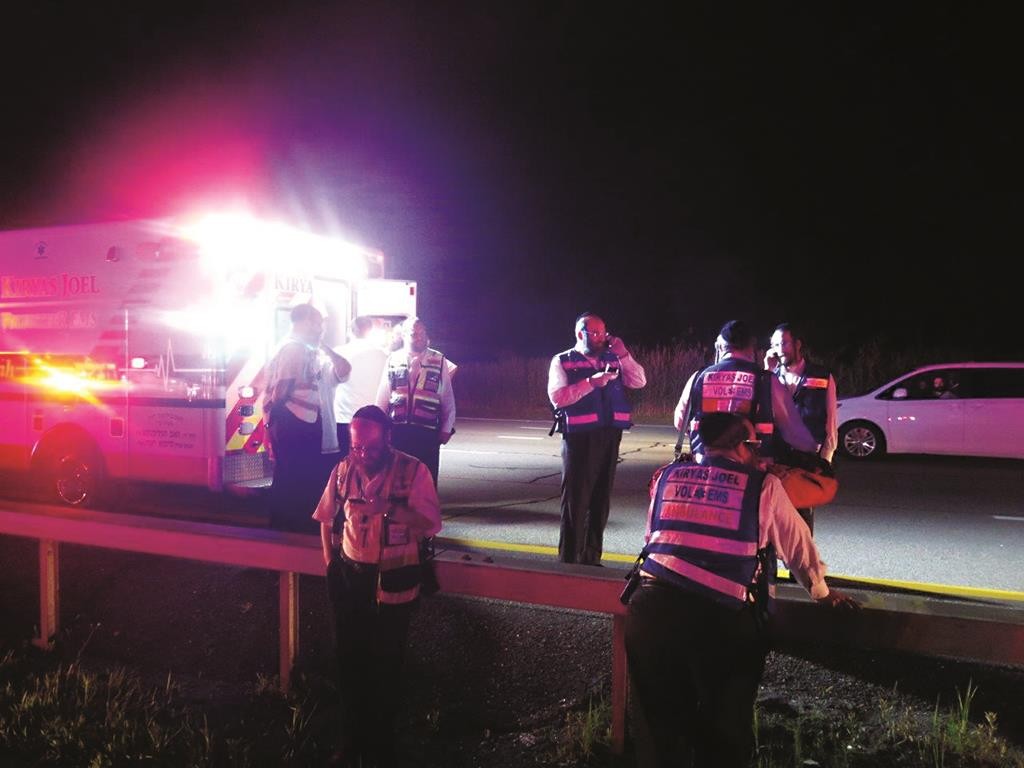 A Woodmere family returning from the Catskills was involved in a car accident that closed a portion of Route 17 for most of Sunday night. The parents, Misha and Estee Rappaport, are listed in serious but stable condition. Four child passengers were, baruch Hashem, unharmed.

“When we heard the dispatch it sounded very serious. They were calling for medics and helicopters, so we all went right away,” Yidel Feit of Hatzolah, one of the first responders at the scene, told Hamodia. “The situation is still very serious, but, baruch Hashem, it sounds as if the mother’s and father’s conditions are better than we feared they were last night.”

The accident occurred in the Town of Goshen, between exits 123 and 124. According to local police, the family’s minivan had pulled over to the shoulder for an unknown reason. The parents were outside the car when they were hit by a passing vehicle. As the second car began to back up, it, in turn, was hit by a local private ambulance. Medics from the ambulance began to provide assistance and called for help. Within minutes, Kiryas Joel and Catskills Hatzolah, as well as Goshen EMS and state police, were all on the scene.

None of the passengers in either of the other two vehicles was injured.

That portion of Route 17 was closed from shortly before midnight, when the accident occurred, until 5:00 a.m. Monday morning.

The parents were airlifted to Westchester Trauma Center; the four children were brought to Orange Regional Medical Center, from where they were soon released.

“Our hearts and tefillos are with the family in the aftermath of this terrible accident,” Rabbi Boruch Ber Bender, director of the Far Rockaway/Five Towns-based Achiezer Community Resource Center, told Hamodia. “The reports have been positive and the doctors are continuing to be hopeful of their chances of recovery.  The [journey] is far from over and we must all continue to daven.”

Rabbi Bender confirmed that the Rappaports’ situation remains critical, but that physicians are “cautiously optimistic.”

At the scene of the accident, the daughter of one Hatzolah member, who was with him as he responded to the call, climbed into the van to talk to and calm the frightened children.

“Acheinu bnei Yisrael came together in an unbelievable way to deal with this emergency,” said Mr. Feit. “Hatzolah units from all over helped out immediately and worked seamlessly with state agencies.”

A team of upstate Hatzolah members arrived at the Westchester hospital before the Rappaports’ transport arrived, while Hatzolah of the Five Towns brought relatives to pick up the children and others to be with the patients.