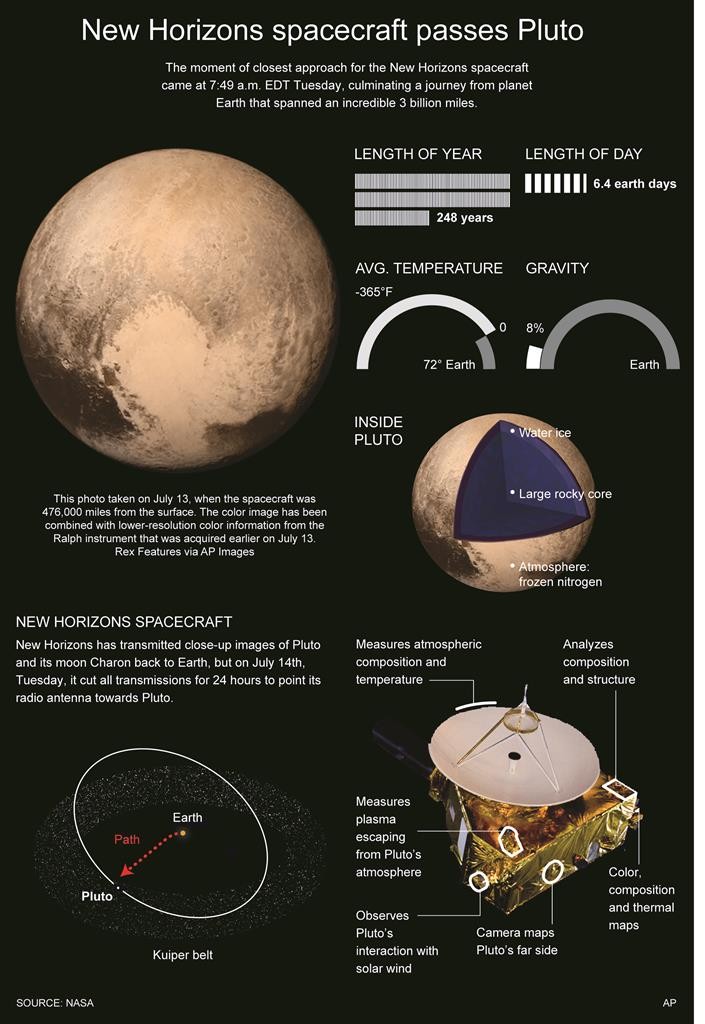 After a nearly decade-long journey, the New Horizons spacecraft zoomed past Pluto early Tuesday. The dwarf planet is now the most distant object ever visited by humanity.

New Horizons’ closest approach was scheduled for Tuesday morning at 7:49 a.m. EDT, when the spacecraft would be just 7,800 miles away — close enough to take the first high-resolution images of Pluto’s mottled landscape. But Tuesday morning NASA officials said it was likely that New Horizons arrived at its destination 72 seconds earlier than projected.

That still puts New Horizons solidly in its target window. It also means the mission got about 43 miles closer to the dwarf planet than originally planned, said New Horizons principal investigator Alan Stern.

A small batch of images is expected to be released Thursday or Friday.

Because of the high speeds necessary to send the craft to the Kuiper belt, it was unable to orbit or otherwise linger near Pluto or its five moons. Instead, New Horizons flew by at 30,800 mph.

To maximize its scientific data collection, the spacecraft is not scheduled to communicate its status until Tuesday evening.

“We lost the signal as planned at 11:17 p.m. Eastern and there is nothing we could do but trust we had prepared it well to set off on its journey on its own,” said Alice Bowman, New Horizons’ mission operations manager.

Pluto is two-thirds the size of Earth’s moon, and its gravity is very weak — just one-fifteenth of Earth’s gravity.

It’s easy to get caught in the gravitational pull of a gas giant like Jupiter, which is about 300 times the mass of Earth. If you can get a spacecraft near enough, the planet’s powerful gravity would draw it down until it could settle into a stable orbit.

But with Pluto, the dynamics are different. A spacecraft could only get caught in an orbit around Pluto if it were moving slowly, at nearly the same velocity as the dwarf planet.

It is possible in theory to slow the spacecraft down ahead of its rendezvous. But that would have required New Horizons to launch with almost 70,000 pounds of fuel, according to calculations by Ben Montet, an astronomy graduate student at Caltech.

Considering the spacecraft weighed just over 1,000 pounds when it left Earth in 2006, that was not going to happen.

And because this mission is so long, and has taken the spacecraft so deep into the solar system, mission architects felt the simplest — and most cost-effective — plan was to blow past Pluto without stopping.

So, scientists had to make due with a fast flyby, carefully choreographing the observations of New Horizons’ suite of instruments to collect as much information as possible in a short amount of time.

The budget for the mission was a relatively low $700 million. It is managed by the Johns Hopkins Applied Physics Laboratory in Maryland, which designed, built and operates the spacecraft.

At the time of the launch, Pluto was still considered a full planet. However, in August 2006 the International Astronomical Union (IAU) downgraded the status of Pluto to that of “dwarf planet.”

As New Horizons has gotten closer to Pluto, its instruments already have revealed new facets of the dwarf planet.

Over the weekend, scientists discovered that it is a bit bigger than they expected. Previous estimates had put it somewhere between 715 and 746 miles, but new information suggests Pluto’s radius is about 736 miles across, putting it solidly at the upper end of the estimate.

The measurement suggests that Pluto’s interior is less dense with more ice and less rock than was previously thought, said Stern.