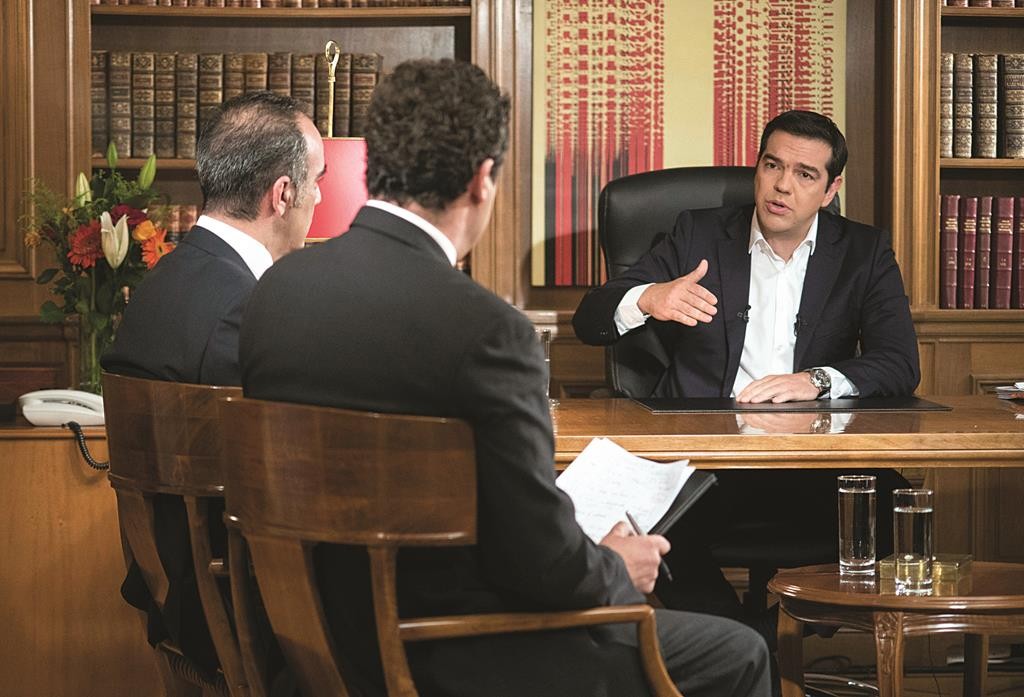 The belt-tightening measures, which include higher sales tax rates, were agreed upon with eurozone leaders to prevent the Greek economy from collapsing, and as part of planned third bailout worth 85 billion euros ($93 billion).

The new measures mean recession-hit Greeks will have to pay more for most goods and services by the end of the week.

Hard-liners in Prime Minister Tsipras’ own Syriza party were in open revolt, and unions and trade associations representing civil servants, municipal workers, pharmacy owners, and others called or extended strikes to coincide with Wednesday’s parliament vote.

Energy Minister Panagiotis Lafazanis said lead eurozone lender Germany and its allies had acted like “financial assassins” by forcing the deal on Athens, and urged Tsipras to reject it.

“The deal is unacceptable,” Lafazanis said in a statement. “It may pass through parliament … but the people will never accept it and will be united in their fight against it.”

In an interview on state media, Tsipras said he would not step down, despite the open dissent within his own Cabinet and party. “I will not run away from my responsibilities,” he said.

He also criticized the deal, but said it was the best Greece could get.

“The policies imposed on us were irrational,” Tsipras said. “We faced a tough and punitive position from our partners … But [the agreement] does offer a way out of the crisis.”

Pro-European opposition parties have pledged support for the bailout bills, but Tsipras could effectively lose his majority in parliament, weakening his ability to push through measures that he had himself vehemently opposed until a few weeks ago.

“There was a coup. A coup in the heart of Europe,” said Kammenos, who heads the right-wing Independent Greeks party.

“They want the government to fall and replace it with one not elected by the Greek people.”

The government holds 162 seats in Greece’s 300-member Parliament, and more than 30 of Syriza’s own lawmakers have publicly voiced objections.

There was speculation Tsipras might choose to reshuffle his Cabinet, which would remove dissenters from key positions.

Athens was forced to accept harsh terms to remain in the euro after defaulting on its debts to the International Monetary Fund and closing banks to prevent a deposit run.

On Monday, it must repay 4.2 billion euros ($4.6 billion) to the European Central Bank. It is also in arrears on 2 billion euros to the International Monetary Fund.

It will take an estimated four weeks for Greece to access the new bailout loans, leaving EU finance ministers scrambling to find ways to get Athens some of the money sooner.

The months-long standoff between Greece and its creditors has taken a heavy toll on an economy that started the year with a 2.9 percent growth forecast.

A national small business association said Tuesday that the new austerity measures were likely to cause the economy to shrink for a seventh year, with a 3.5 percent drop in output.

Despite the bleak forecasts, some Greeks appeared to take the latest turmoil in stride, saying the measures Greece will have to pass are harsh but that the alternative would have been worse.

“We aren’t in a good position within the European Union under the current measures and under this present situation,” said Kostas Plafoutzis, an Athens merchant. “But under the current conditions, if we exit the EU, we will find ourselves in a considerably worse situation.”