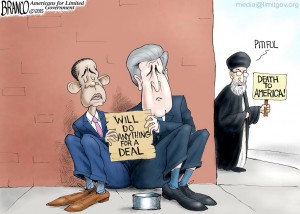 If President Barack Obama’s nuclear deal with Iran survives congressional scrutiny, his best hope for keeping it in one piece is a Democrat succeeding him in the White House — and even then the long-term prospects of the agreement paving the way for improved U.S.-Iran relations are far from guaranteed.

Democratic front-runner Hillary Clinton’s reaction to the deal was cautious. Speaking to reporters following a closed-door meeting with Democratic lawmakers on Capitol Hill, Clinton said that while she would enforce the deal, she remains extremely wary of Iran.

“We have to treat this as an ongoing enforcement effort, which I certainly strongly support, and as president would be absolutely devoted to ensuring that the agreement is followed,” Clinton said. She said she applauds Obama and Secretary of State John F. Kerry “for their extraordinary efforts,” calling the deal “an important step in putting the lid on Iran’s nuclear program.” But then she went on to express reservations about Iran’s commitment to peace.

“We still have a lot of concern about the bad behavior and the actions by Iran,” Clinton said, “which remains the largest state sponsor of terrorism, which does go after and undermine governments in the region, that poses an existential threat to Israel, and that unfairly, unlawfully confines and tries Americans on trumped-up charges. That bad behavior is something we have to address.”

Clinton, Obama’s former secretary of state, has long been more hawkish in her posture toward Iran than he. Still, her reaction offered the White House far more hope than that of most other candidates in the race, who implied they would do everything possible to roll it back.

“This isn’t diplomacy — it is appeasement,” former Florida Gov. Jeb Bush, a GOP front-runner, said in a statement, calling the deal “dangerous, deeply flawed and shortsighted.” His fellow Florida Republican Sen. Marco Rubio said lack of support for the deal in Congress — leading Obama to already warn he will veto any measures that seek to scuttle the agreement — “will tell the Iranians and the world that this is Barack Obama’s deal, not an agreement with lasting support from the United States.”

Republicans may detest the Iran deal, but news of it comes at an opportune time for them. GOP candidates are eager to shift public attention away from the topic of immigration, which has dominated the campaign-trail debate in recent days. Donald Trump’s rants against undocumented immigrants — and the reactions to them by his rivals seeking the Republican nomination — have raised a fresh round of questions about the party’s ability to connect with Latinos, the fastest-growing segment of the American population and a group whose support is key to winning the White House.

The Iran nuclear threat is a far more clear-cut issue for Republicans. It provides them a line of attack against Democrats, and an opportunity to shift voter attention toward foreign policy, a less politically perilous area for them.

Wisconsin Gov. Scott Walker, who entered the presidential race just this week, declared the agreement “will be remembered as one of America’s worst diplomatic failures.” He said Obama “has abandoned the bipartisan principles that have guided our nonproliferation policy and kept the world safe from nuclear danger for decades.”

New Jersey Gov. Chris Christie and Louisiana Gov. Bobby Jindal, who are also seeking the Republican nomination, said much the same, as did former Hewlett-Packard CEO Carly Fiorina and former Sen. Rick Santorum of Pennsylvania. Christie warned that “the deal threatens Israel, it threatens the United States, and it turns 70 years of nuclear policy on its head.”

Perhaps Obama’s best hope for keeping the deal intact is a Bernie Sanders White House. Sanders, the self-described socialist running for the Democratic nomination for president, quickly declared the agreement “a victory for diplomacy over saber-rattling” that “could keep the United States from being drawn into another never-ending war in the Middle East.”

This article appeared in print on page 12 of the July 15th, 2015 edition of Hamodia.