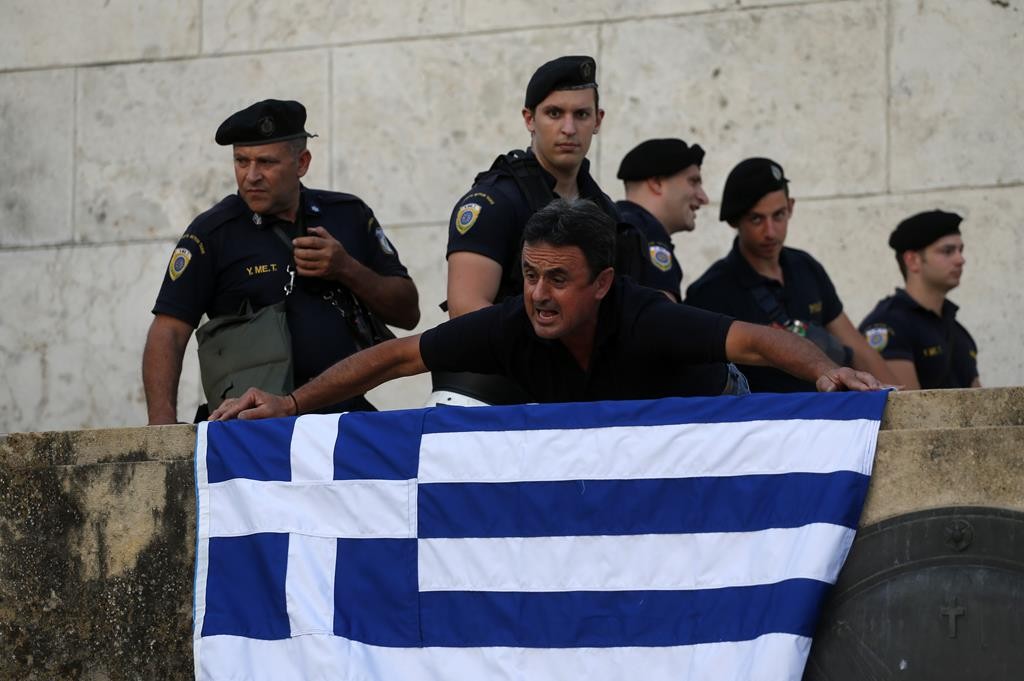 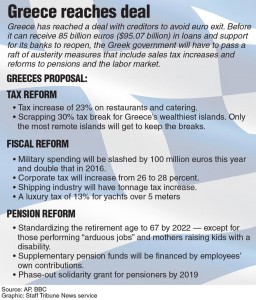 After grueling, often angry negotiations that tested the limits of European unity, Greece struck a preliminary rescue deal with its creditors Monday that should avert an imminent financial catastrophe but also guarantees years more hardship and sacrifice for its people.

Prime Minister Alexis Tsipras flew home to sell the bailout plan to skeptical lawmakers and political allies, some of whom accused him of selling Greece out. Panos Kammenos, leader of the junior partner in Tsipras’ coalition government, denounced the deal as a German-led “coup.”

“This deal introduced many new issues … we cannot agree with it,” he said after meeting with Tsipras.

To close the deal with his partners in the euro currency, Tsipras had to consent to a raft of austerity measures, including sales tax hikes and pension and labor reforms — measures he had campaigned vociferously against over the last five years of Greece’s financial crisis.

Since his election in January, the youthful Tsipras has faced intense pressure to backpedal on many of his promises to Greece’s exhausted electorate. Finally, faced Sunday by the leaders of the 18 other nations that share the euro and the knowledge that Greek banks were just days from running out of money, the moment came when he couldn’t resist any more.

A series of supposed red lines vanished, including objections to tight international oversight of Greece’s economy, continued involvement by the International Monetary Fund in Greece’s bailout program and cuts to pensions.

The result of marathon negotiations emerged Monday: about 85 billion euros ($95.1 billion) in loans and financial support for Greece over three years that will preserve its membership in the euro, shore up its banks and allow a modicum of stability to return to the battered Greek economy.

Creditors have also dangled the carrot of a possible future debt restructuring in the event of a smooth bailout.

Syriza’s Left Platform, a group of traditionalists in Tsipras’ own party, swiftly denounced the agreement as the “worst deal possible … [one] that maintains the country’s status: a debt colony under a German-run European Union.”

Passage of the new measures appears assured, since Greece’s opposition parties have pledged to support Tsipras’ deal. But dissent within the ruling Syriza party is threatening his coalition, raising the prospect of some sort of national unity government or an early election later this year.