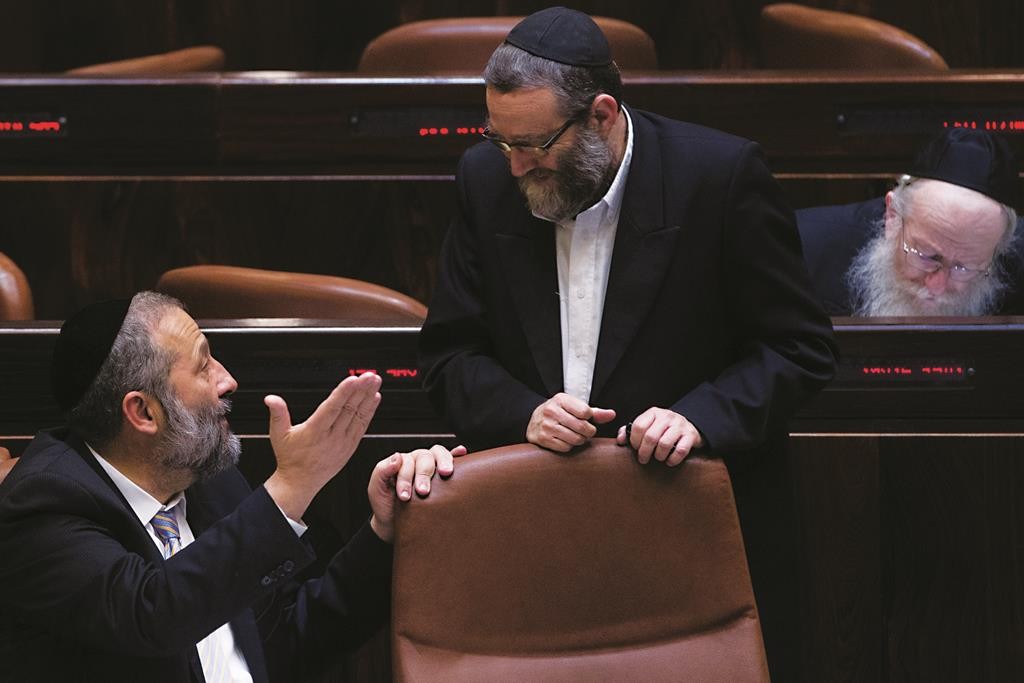 The chareidi parties have categorically rejected a proposal to rewrite coalition agreements providing funding to yeshivos and child allowances, even if it means that Prime Minister Binyamin Netanyahu’s coalition government will fall.

“The agreements must be carried out. Do not test us,” United Torah Judaism MK Rabbi  Yaakov Litzman warned in a series of late-night meetings held among the coalition partners in the Finance Ministry offices.

“If coalition leaders want an alternative government, don’t seek an agreement with us. We will stand for what was agreed upon in full. We will oppose any changes to what was signed, and we will not back down,” he said.

Rabbi Litzman noted that the Finance Ministry had approved everything in the coalition agreement, point-by-point, and that they cannot come to him now “rolling their eyes” and pretending that they are “surprised” at the cost of the agreements. “This is not serious, and we do not accept it,” he said.

That was in response to a statement released by the Finance Ministry claiming not to be bound by the coalition accords. “Those were political agreements that [we] did not take part in,” it said.

The Finance Ministry argues that across-the-board cuts in the ministerial budgets will be necessary unless a major reduction in the coalition agreements, amounting to about 8-9 billion shekels ($2.4 billion) is obtained. This, along with trims in defense spending, are in order to help keep the state deficits to within the legal ceiling of 14 billion shekels.

Finance officials are reportedly counting on UTJ to back down and compromise rather than face new elections, for which they will be blamed. A proposal for spreading the four billion shekels in allocations over two years was put forward, but UTJ would not consider it.

In addition, Shas party head Aryeh Deri is holding the government to its promise of ending the value-added sales tax (VAT) on foodstuffs and other basics. A Shas official also insisted that the Finance Ministry had signed on to all the allocations listed in the coalition agreements.

It was also noted caustically that while Finance Minister Moshe Kahlon was pressuring the chareidi parties to accept cuts, he had no such intentions for monies agreed to on behalf of his Kulanu party. These include a pay raise for soldiers, higher senior citizens’ allowances, and unemployment compensation for the self-employed.

Other parties and ministers are also resisting the decree of the Finance Ministry. Jewish Home says it won’t give up the promised supplemental funding for national-religious education. Public Security Minister Gilad Erdan and Social Welfare Minister Haim Katz, both of Likud, have said they won’t vote for the budget if allocations promised to them are not carried out.

Because of the dispute, the budget is stalled. Netanyahu has postponed further discussion on it in open cabinet meetings until the impasse with the chareidim can be resolved.

A draft of the budget is scheduled to be brought to the Knesset by August 31, while a vote on the first reading should take place on September 2. Votes on the second and third readings are written in for November 19. If the government fails to meet the deadlines, new elections may be unavoidable.

UTJ MK Rabbi Moshe Gafni, the Knesset Finance Committee chairman, sounded an optimistic note: “I believe that the minister of finance will realize that agreements must be kept. The problem is mainly on the part of the officials. In the end, the prime minister and minister of finance realize that agreements cannot be broken. There will be no drastic step in the end. It will end with an across-the-board cut, or in the postponement of projects and financial obligations,” Globes quoted him as saying.