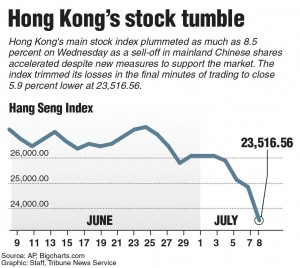 It was already a tough day in the market when the unexpected hit.

The outage came as traders had plenty of other things to worry about. Concerns about China’s plunging stock market and a logjam in talks between Greece and its creditors weighed on the mood. Major indexes were already falling before the shutdown, which occurred shortly after 11:30 a.m. Eastern time. NYSE resumed trading at 3:10 p.m.

The broader stock market stayed open as orders to buy and sell kept flowing to the Nasdaq and other exchanges around the country.

In China, the Shanghai Composite sank 6 percent despite new attempts by China’s government to stop the selling. Hong Kong’s Hang Seng, a victim of the turmoil in mainland Chinese markets, also lost 6 percent. Beijing ordered state-owned companies to buy shares and promised more credit to finance trading. The Shanghai index has lost almost a third of its value in the last month. It is still up 70 percent over the past year.

In Europe, Greece applied for a new three-year loan and said it would have a new proposal for creditors in the coming days. The deeply indebted country needs a financial lifeline from its European lenders before its banks collapse, an event that could push Greece out of the currency union. The region’s major markets finished with gains.Germany’s DAX gained 0.7 percent and France’s CAC 40 rose 0.8 percent. Britain’s FTSE 100 added 0.9 percent.

The price of oil fell after the Energy Department reported a surprise increase in crude oil supplies for the second straight week. Benchmark U.S. crude fell 68 cents to close at $51.65 a barrel in New York. Brent crude, an international benchmark, rose 20 cents to close at $57.05 in London.