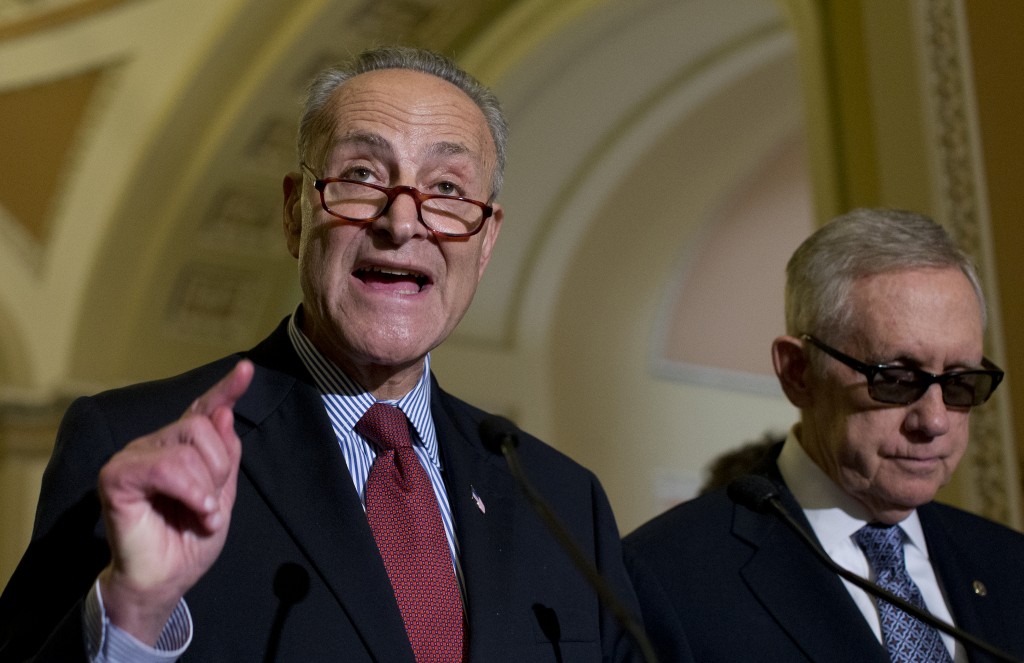 Many of the details need to be worked out, and huge hurdles remain. But if successful, it would be the kind of bipartisan compromise on taxes that has long eluded Republicans and Democrats in Washington.

The plan focuses on the taxes U.S. firms pay on their foreign profits. It was written by Sen. Chuck Schumer, D-NY, and Sen. Rob Portman, R-OH.

The framework would require U.S.-based corporations to pay a one-time tax on up to $2 trillion in foreign profits that U.S. firms have parked overseas. The tax rate has not been determined, but it would be considerably less than the 35 percent corporate-income-tax rate currently in effect, according to the plan.

The tax would generate money for infrastructure improvements – how much would depend on the tax rate. Funding for highways is scheduled to run out at the end of the month.

Going forward, the plan would allow U.S. corporations to exempt more of their foreign profits from U.S. taxes.

“So far, no one has suggested any decent alternative as a way to fund highways in a robust way,” Schumer said in an interview. “Tax reform is a difficult issue, but this may intensify the focus on it, and jump-start it a little bit.”

The plan would also create a special tax rate for business profits from intellectual property, such as patents, which many U.S. firms assign to subsidiaries in low-tax countries as a way to lower their U.S. taxes. The goal is to encourage these companies to assign patents to U.S. entities, making the profits they generate subject to U.S. taxes.

Important details have yet to be worked out, such as the special tax rate and the legal definition of which profits would qualify. If the plan moves forward, these details would be the subject of intense lobbying and debate in Washington.

The Senate Finance Committee has been working since the start of the year to draft proposals to overhaul and simplify the nation’s complicated tax system. The committee was split into five working groups to tackle various areas of the tax code. Portman and Schumer headed the group working on international taxes.

Schumer is the No. 3 Democrat in the Senate and is expected to take over as the Democratic leader after Minority Leader Harry Reid, D-NV, retires at the end of 2016.

The Republican-led Congress has all but given up on overhauling the taxes paid by individuals, as long as President Barack Obama is in office. That’s because Democrats and Republicans don’t agree on how much revenue the government should collect – and who should pay it.

Republicans want to lower individual income-tax rates, with at least some of that money recouped by cutting back credits, deductions and exemptions. Obama has made it clear that he is not interested in lowering the top income-tax rates for individuals.

The divide was highlighted by the Finance Committee’s working group on taxes paid by individuals, which didn’t make recommendations on tax rates.

Still, lawmakers are hopeful that they can find common ground on other tax issues. They are focusing on the taxes paid by U.S. corporations on their foreign profits.

Rep. Paul Ryan, the Wisconsin Republican who chairs the tax-writing House Ways and Means Committee, praised the framework produced by Portman and Schumer. He said it could provide the basis for a tax package that would reduce the number of U.S. corporations relocating their headquarters to other countries.

The reaction from the White House was more tepid.

At 35 percent, the United States has the highest corporate-tax rate in the industrialized world. However, the tax code is filled with exemptions, credits and deductions that enable many companies to pay taxes at a far lower rate.

The United States is unique among most developed nations because it taxes corporate profits, even if they are earned in other countries. However, there is a big caveat: The profits aren’t taxed by the U.S. unless they are brought back to the U.S.