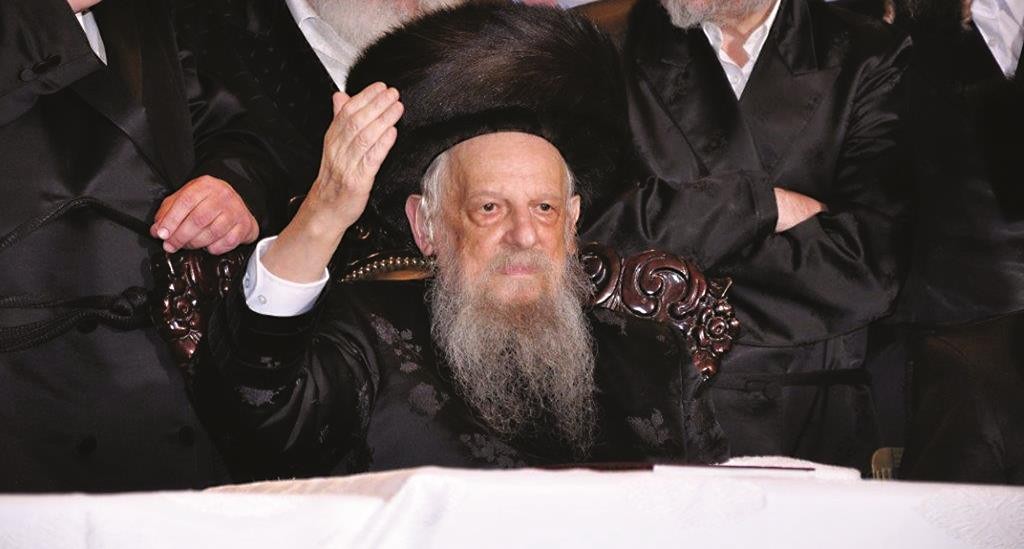 Klal Yisrael was grieved and plunged into sudden mourning upon hearing of the petirah of the Seret-Vizhnitzer Rebbe, Harav Eliezer Hager, zy”a, on Tuesday night. He was 90 years old.

The Rebbe had a severe heart attack in the evening in his home in Ramat Vizhnitz in Haifa, and his condition rapidly deteriorated. Thousands of Chassidim were urged to daven for the Rebbe’s recovery but, unfortunately, it was not to be. Just a short time later, the news emerged that the Rebbe had returned his soul to its Maker.

The Rebbe was born on Motzoei Yom Kippur 5685/1924, in the home of his grandfather, the Ahavas Yisrael of Vizhnitz, who lived at the time in a building belonging to philanthropist Reb Herman Schwartz in Grosswardein.

The Rebbe’s father, Harav Baruch Hager, the Mekor Baruch, zy”a, served as the Rav of the village of Polyan-Riskova, in the Marmarosh region of Romania. He had come with the Rebbe’s mother, Rebbetzin Tzirel, a”h, to spend the days of Selichos with his father in Grosswardein, the capital of Transylvania.

When the grandfather saw the new baby, he turned to his daughter-in-law, the child’s mother, and said to those present:

The shalom zachor was held on Leil Shabbos Parashas Haazinu 5785/1924, at the tisch of the Vizhnitzer Rebbe, and during his divrei Torah he spoke about the passuk “She’al avicha veyagedcha zekeinecha veyomru lach.”

The bris was held on 18 Tishrei, the second day of Chol Hamoed Sukkos. The simchah spread not only among the family and members of the Vizhnitzer court, but to all the frum residents of Grosswardein, who were organized at the time under the Tzeirei Agudas Yisrael in the city. Tzeirei contributed 770 lei (the Romanian currency) for the Keren HaTorah (similar to the Vaad Hayeshivos in Eretz Yisrael) in honor of the bris.

When the Mekor Baruch was appointed the Rav in Koczman, Bukovina, the Rebbe was one of the first students in the local Talmud Torah, which was established by his father. He also had a private melamed to supplement his studies.

When the Rebbe’s father, the Mekor Baruch, moved to the city of Seret in 5696/1936 and established his famed yeshivah, Bais Yisrael Vetamchin D’Oraisa, the Rebbe was among the select students. That was in addition to what he heard and learned from his father.

He was very close to his grandfather, the Ahavas Yisrael, and would spend time with him whenever he came to the village of Vizhnitz. In the summer of 5695/1935, when his father traveled to Eretz Yisrael for a visit, the Rebbe stayed there, and the family also spent the last Pesach of the Ahavas Yisrael’s life together with him, in Grosswardein. The Rebbe would longingly recall that he followed his grandfather everywhere, even to the room where he received kvitlach, so he could observe his every action.

During the Holocaust, the residents of Bukovina were exiled to the Trans-Dneistria region in Ukraine. There, the Rebbe continued his studies, mostly with his uncle, Harav Avraham Moshe Babad, Rav of Gur Ha’amura, and later in Eretz Yisrael, with the Rav of Givat Ha’aliyah in Yaffo, as well as from his father.

In Av 5706/1946, he came to Eretz Yisrael on an illegal ship and was interned in the Atlit detention center by the British. His uncle, the Damesek Eliezer of Vizhnitz, who was already living in Eretz Yisrael and was then on his deathbed (and passed away on 2 Elul of that year), was able to smuggle to his nephew a note with a brachah welcoming him to Eretz Yisrael.

On 4 Nissan 5711/1951, the Rebbe married Rebbetzin Chaya Tzirel, a”h, the daughter of Harav Shalom Ozer Brown, z”l, one of the respected members of the Satmar community.

Throughout his father’s life, the Rebbe refused to don the mantle of Rabbanus, and did everything he could to work for a living.

When the Mekor Baruch of SeretVizhnitz was niftar in Cheshvan 5724/1963, the Rebbe agreed — after much deliberation and hesitation — to accede to the request of the Chassidim that he accept the leadership of the community in his father’s stead.

Thus began a tenure of leadership that was to last 51 years.

The court is based in the Ramat Vizhnitz neighborhood of Haifa, where more than 400 families of Chassidim reside. The beis medrash there was built as a replica of the old beis medrash of the Chassidus in Romania.

Under the Rebbe’s leadership, the community expanded to include Talmudei Torah, yeshivos, educational institutions, chessed organizations, shtieblach and many other communal endeavors.

The Rebbe’s avodas hakodesh was awe inspiring. He would sit in the beis medrash during davening and at other times, such as when reading the Megillah on Purim, or during Akdamus on Shavuos, or when baking matzos for Pesach, it was obvious that he was focused on his avodas Hashem and totally disconnected from those around him. His avodah was internal and restrained.

Fifty years ago, after the War, the people who came to the Rebbe were mostly survivors of the camps. The general situation of chareidi Jewry was not very good at the time, either. The Rebbe was then a leader of an orphaned generation, and a compassionate shepherd to his Chassidim. He opened his heart and his home to every Jew.

The Rebbe was known for his overwhelming ahavas Yisrael. He welcomed each and every person like he was his own son, and showed tremendous concern for his Chassidim — sharing in their simchos and, l’havdil, their grief as though it was his own.

He offered a wellspring of advice to the Chassidim and helped them in any way he could. He was also very knowledgeable in medical matters, and doctors would be amazed at his expertise in so many areas.

He was very focused on shemiras halashon and shalom, and in almost every speech he delivered and at every dvar Torah he would speak about how important it is to refrain from sinning with the tongue.

He would hold a lengthy tisch each Shabbos. Even in his final years, when he was weak, he would hold the tisch with mesirus nefesh. This last Shabbos there was also a tisch, attended by many of the Chassdiim.

Standing at the Rebbe’s side throughout his years of leadership was his younger brother, Harav Moshe Hager, zt”l, Rosh Yeshivas Yachel Yisrael of Seret-Vizhnitz. There was a deep, mutual love between the brothers.

The Rebbe was loyal to Agudas Yisrael and helped preserve Yiddishkeit in Haifa. He was a man of peace, and in Haifa it was known that all the religious parties ran together on a united list for elections.

The agreements, in which each party tried to gain as much as possible, were signed in the Rebbe’s home, with the lawyer of each party present. The Rebbe was able to work things out between all parties. He always announced, “We in Seretz-Vizhnitz are foregoing being represented…” The united religious list was disbanded only when the National Religious party decided to send a woman to represent it on the city council.

He was active on pubic issues relating to Shabbos, coexistence between communities, a separate, kosher  beach and more. He also helped build hospitals in the city, and when there were delays in the budget, he got involved to help others.

Two years ago, in Tammuz 5773/2013, the Rebbe was hospitalized with back problems, and since then he grew steadily weaker. Last week his condition improved somewhat, and he began to receive the public, and even danced with his great-grandson in honor of his bar mitzvah.

When the news came of the Rebbe’s sudden passing, the paroches was taken off the aron kodesh and the aron was placed in the beis medrash in Haifa.

The Rebbe is survived by his only son, Harav Yaakov Hager, who will succeed him as Rebbe, and two daughters, Rebbetzin Ruchel Kornreich and Rebbetzin Miriam Spitz.