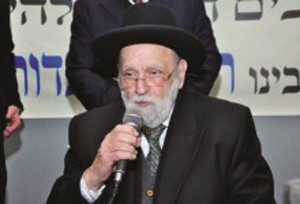 Rav Kaduri, 88, was the only son of the venerated mekubal in Eretz Yisrael, Harav Yitzchak Kaduri, zt”l.

After the petirah of his father, in 5766/2006, Rav David was appointed as his successor by Harav Mordechai Eliyahu, zt”l, and, ybl”c, Harav Shlomo Amar, shlita. Talmidim at the yeshivah for Kabbalah that his father had founded, Yeshivat Nachalat Yitzchak in the Bucharim neighborhood in Yerushalayim, related that following the petirah of Rav Yitzchak, it was unknown whether, and how, the yeshivah would continue to function, especially as Rav David saw himself unworthy of filling his father’s position.

Still, he led the yeshivah, and it grew significantly over the years. He delivered shiurim and sichos there.

In recent years there were as many as six kollelim in the yeshivah, both in pshat and Kabbalah. Rav David would see to it that avreichim in the kollelim received a double wage ahead of the Yamim Tovim.

In Adar of this year, some four months ago, Rav David slipped and fell on the steps of Yeshivat Nachalat Yitzchak after davening Shacharis there. He was hospitalized in serious condition after sustaining a major head injury.

The medical team at the Hadassah Ein Kerem hospital managed to stabilize his condition, but he was fighting for his life over the last period. His situation deteriorated over the past few days, and he was niftar Tuesday, shortly before shkiah.

This article appeared in print on page 29 of the July 8th, 2015 edition of Hamodia.