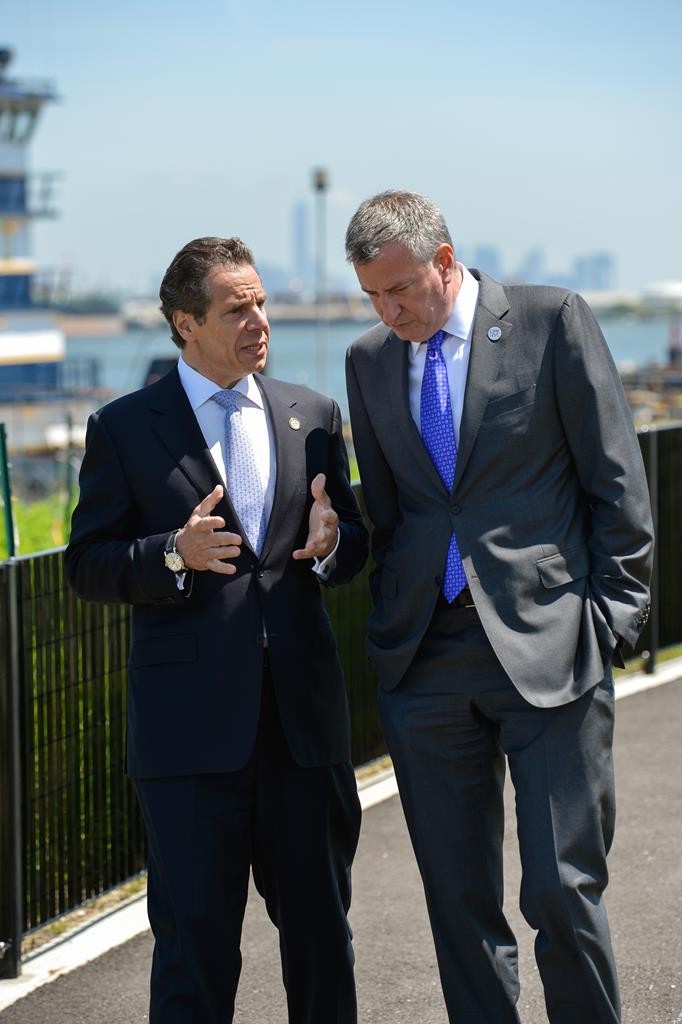 Gov. Andrew Cuomo said Tuesday that he understands why Mayor Bill de Blasio would be frustrated by the outcome of last month’s legislative session but it wasn’t his “style” to lash out with accusations of vendettas.

“The mayor was obviously frustrated he didn’t get everything he wanted from the legislative session. Welcome to Albany,” Cuomo told reporters in Manhattan.

“There is something that we have in Albany that you don’t have here in New York City, which is called a Republican house. New York City, it’s basically a City Council that is overwhelmingly Democratic,” Cuomo said. “So you don’t have to deal with those annoying issues of partisanship and getting two sides, two parties, to agree. Albany and Washington have legislative bodies that are mixed. And you either compromise or you have gridlock.”

It was Cuomo’s first response to last Tuesday’s accusations by the mayor, who is on a week-long vacation in the southwest, that the governor deliberately stunted his ideas.

De Blasio, who 18 months ago in his inaugural address pledged to stand “shoulder to shoulder” with Cuomo, his one-time boss and friend of more than two decades, revised his opinion of him in a highly unusual and extraordinarily personal news conference.

“I started with, meaning a year and a half ago, with the hope of a very strong partnership,” de Blasio said. “I have been disappointed at every turn, and these last couple of examples really are beyond the pale.”

Though the governor has been far more foe than friend to the liberal mayor’s agenda throughout his time in office, de Blasio had been reluctant to criticize Cuomo, a fellow Democrat, time and again taking the high road and refusing to hit back at the steady stream of slights emanating from the state Capitol building.

But the disappointing results of the state legislative session moved de Blasio to change tactics, eschewing his normal hope of building consensus in favor of taking the bold step of directly confronting the state’s most powerful official.

The mayor attacked Cuomo for not supporting his tax break plan to create more affordable housing and said the governor played an instrumental role in the legislature reauthorizing the extension of mayoral control of city schools by just one year. De Blasio, who had asked for permanent control, said Cuomo utilized a cravenly transactional style of negotiating to further his own aims and “did not act with New York City’s interests at heart.”

“There is a kind of deal-making and horse-trading that he engages in that I think often obscures the truth,” said de Blasio, who previously worked with Cuomo at the U.S. Department of Housing and Urban Development. “It gets so convoluted I’m not sure he and the people around him remember where they began.”

De Blasio’s startling statements, delivered to a small group of reporters summoned to his office at City Hall, were the most direct challenge from a New York mayor to a governor in decades. Aides to the mayor said he chose to break his silence not just to unburden himself but to fight any perception of weakness and make clear he would rally constituents and elected officials to combat the governor’s interference.

But the move carries tremendous political risks, as Cuomo wields significant power over the city and the mayor. Cuomo’s communications director delivered a shot across the mayor’s bow after de Blasio’s comments.

Asked to elaborate on de Blasio’s remarks that the governor carried out “vendettas” against people who don’t agree with him, Cuomo demurred.

“It’s clear that his style is to air his public frustration,” Cuomo said. “Everybody has their own style, I don’t choose to do that. I try to bite my tongue once in a while on personal feelings.”

The mayor said Tuesday that he knew his remarks could have consequences.

“I’m not going to be surprised if these statements lead to some attempts at revenge, and we’ll just call them right out because we’re just not going to play that way,” de Blasio said. “We’re not going to accept that as anything like acceptable government practice.”