Officials Investigate Another Fire At a Southern Black Church 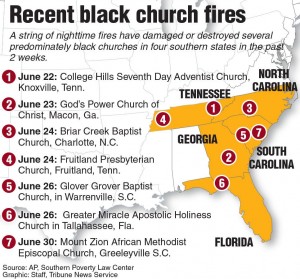 Authorities in South Carolina said Wednesday that they were investigating a devastating fire at a black church that was the target of a Ku Klux Klan attack 20 years ago.

It wasn’t clear whether the fire that destroyed Mount Zion African Methodist Episcopal Church in Greeleyville on Tuesday night was arson. Officials at a morning news conference said they were continuing to investigate.

“We haven’t ruled anything out at this point,” said Craig Chillcott of the Charlotte field division of the Bureau of Alcohol, Tobacco, Firearms and Explosives.

Greeleyville is about 50 miles north of Charleston, where a pastor and eight parishioners were shot to death at the Emanuel AME Church on June 17.

The fire took place as federal authorities are investigating a series of fires at black churches in several Southern states. There is no indication that the fires are connected, officials have said.

The latest fire was reported as storms with lightning moved through the area.

This article appeared in print on page 2 of the July 2nd, 2015 edition of Hamodia.