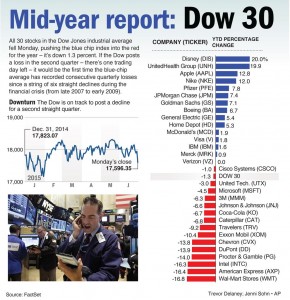 The U.S. stock market stabilized on Tuesday as investors followed the latest developments in the Greek debt saga.

Stocks edged higher a day after the market had its worst day of the year. That slump was prompted by a breakdown in talks between Greece and its creditors. Greece’s European bailout program ends Tuesday at midnight, and the country hasn’t yet managed to agree on an extension or a new deal with creditors.

The Greek government has also called a referendum for Sunday, asking Greeks to vote on whether the nation should accept the deal offered by its creditors. Investors are concerned that if Greece defaults on its debts the nation will eventually drop out of the euro currency, a move that could potentially set off turmoil in financial markets.

Even though the standoff in Greece is far removed from the U.S., the global nature of financial markets will ensure that any ripple effects will be felt across the Atlantic, said Mike Ryan, chief investment strategist at UBS Wealth Management Americas.

“There are obvious concerns that failure to reach some kind of an agreement could put Greece on a path to a eurozone exit,” Ryan said. “If there is going to be volatility in global markets, it will be reflected in U.S. markets as well.”

Despite Monday’s slump, many investors remain confident U.S. financial markets will hold their own.

“Whatever happens here, even if it’s the worst case scenario and Greece drops out (of the euro), the pullback probably wouldn’t be gigantic,” said Scott Wren, a senior global equity strategist at the Wells Fargo Investment Institute.

Bond insurers, including MBIA and Ambac, fell sharply for a second day as investors followed the debt crisis in Puerto Rico. Credit-rating firm Standard & Poor’s said that a default, or a restructuring, of the island’s debt within the next six months appeared inevitable.

Puerto Rico’s governor said Monday night he will form a financial team to negotiate with bondholders on delaying debt payments and then restructuring $72 billion in public debt that he says the island can’t repay.

“If Greece wasn’t happening, this would be a major story right now,” said JJ Kinanhan, chief strategist at TD Ameritrade.

Andrew Gadlin, an analyst who follows MBIA for the broker Odeon, estimates that the insurer has $5.8 billion of exposure to Puerto Rico’s debt.

Mark Palmer, an analyst at BTIG, wrote in a note Monday that bond insurers were “unbuyable” until there was greater clarity on the losses the firms could face.

Investors were also looking forward to the U.S. government’s monthly jobs report, which will be published on Thursday. A strong report is likely to increase investors’ expectations that the Federal Reserve will raise its benchmark interest rate for the first time in close to a decade later this year.

U.S. financial markets will be closed Friday in observance of Independence Day.

Government bond prices fell slightly after big gains on Monday. The yield on the 10-year Treasury note edged up to 2.35 percent from 2.33 percent a day earlier.

The price of oil rose for the first time in a week as negotiations with Iran over its nuclear program were extended, potentially delaying a return of Iranian crude to the market.