Technology Your Face on Your Espresso? Highlights From Tech Show
Health, Science & Technology 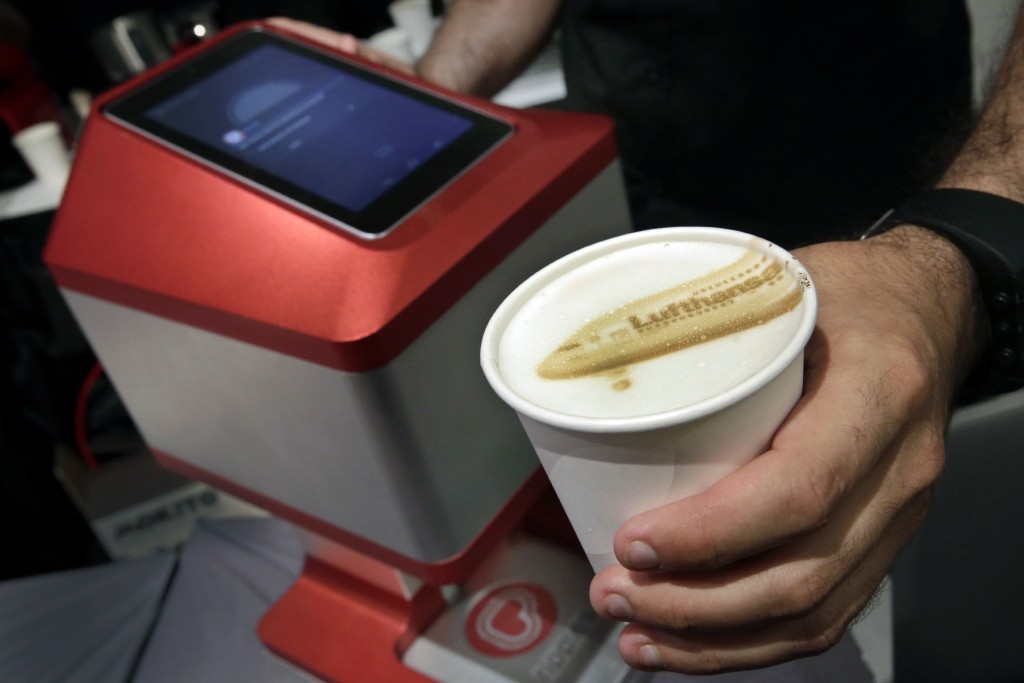 Imagine staring deep into the foam of your favorite espresso drink and seeing a face looking back at you. Or how about using the charge in your fingers to clean your teeth?

At the CE Week gadget show in New York last week, there were several standouts amid the sea of smartphone chargers and 3D printers. Some are set to hit stores near you in the not-too-distant future.

Here’s a look at some of the more fun and fabulous items on display:

Ripples combines 3D and ink-jet printer technologies to paint a picture on top of any foam-covered drink using coffee extract. Baristas can choose a pre-loaded design or upload their own over wi-fi, such as a picture of the person receiving the drink, corporate logos or even jokes.

The Israeli company behind it, Stream CC, says it has a deal to introduce the machines in Lufthansa’s first- and business-class lounges this year.

The $999 machine will be available to commercial establishments that serve coffee. Service plans start at $75 per month.

For the beer aficionado who wants to experience the frothy head of a properly poured draft beer at home, there is Fizzics.

The personal beer dispenser takes beer from any store-bought can, bottle or growler and applies some magic to give it the bubbles and taste of something straight from the tap.

All styles of beer from pilsners to stouts work with the machine.

The invention was funded by an Indiegogo campaign that raised about $148,000, nearly triple its goal. Commercial sales are expected to start in September, with the machines retailing for nearly $200.

A T-REX THAT PLAYS FETCH

If you think a puppy is too much responsibility for your child, how about a mini robot Tyrannosaurus Rex?

Using location technology, the MiPosaur can chase after a matching ball, go for a walk with its owner and even dance and make happy sounds. The exceptionally cute robots will go on sale in August at major retailers such as Target, Wal-Mart and Toys R Us. The combination of a MiPosaur and a ball will cost about $120.

WowWee, the MiPosaur’s parent company, also showed off its REV battle cars. For $100 you can get a pair of race cars controlled by a smartphone or tablet app. Players use the cars to chase and shoot at each other. Lights and sounds signal a hit. Those who can’t find a partner can choose a computerized bad guy to play against.

Given the job possibilities down the road, it’s never too early to start teaching your kids how to code.

Ozobot aims to do just that. By drawing lines in various colors, kids as young as seven years old can tell the ping-pong-ball-sized robot to do things like go forward, backward or spin around.

While the original Ozobot has been around for a while, an updated version is geared at older children. Rather than draw colored lines, kids program their Ozobot on a computer.

The new Ozobots sell for $60 on Amazon. Older models, which sell for about $50, can be upgraded to add the coding software for $10.

There’s a lot of power in your little finger.

The Ionic ProClean toothbrush generates millions of ions negative by creating a circuit involving the moistened toothbrush and a person’s palm or finger. According to the company, the completion of the circuit gets the ions flowing. The ions then polarize plaque fluid, causing a person’s tooth enamel to repel it. This loosens and removes the plaque.

A small light on the brush indicates when this is happening. The brushes sell for about $10.