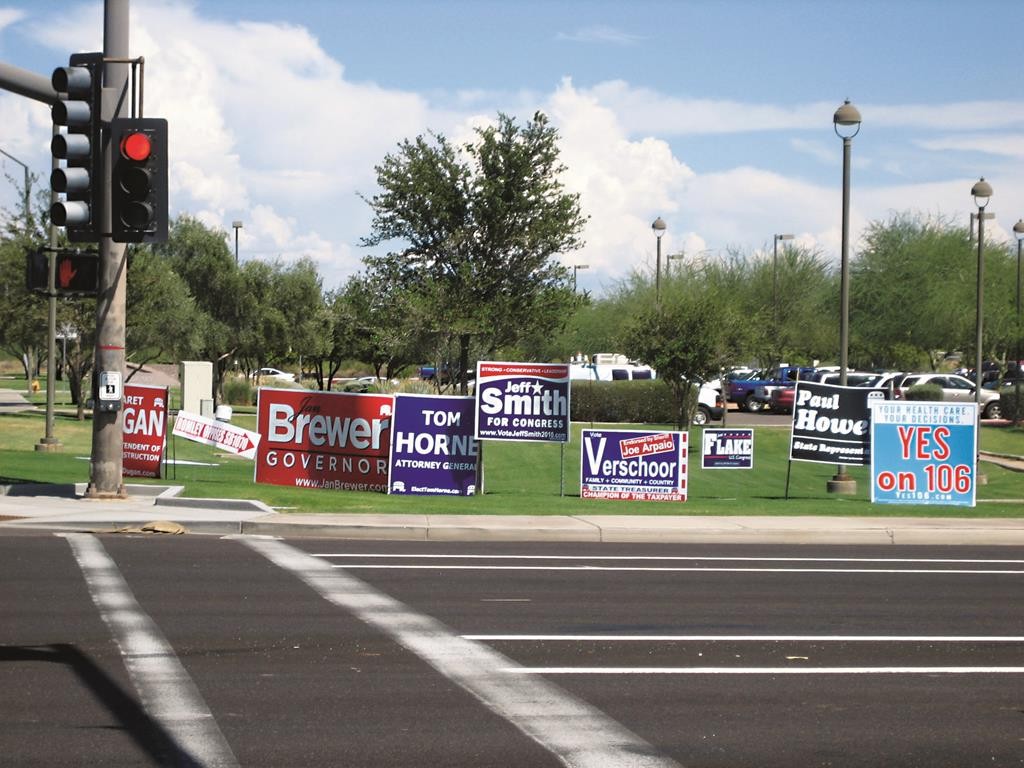 The Supreme Court unanimously ruled Thursday for an Arizona church in a dispute over a town’s sign law in a decision that three justices said could threaten municipal sign regulations across the country.

The Good News Community Church, led by Pastor Clyde Reed, had sued the town of Gilbert for treating religious groups more severely than others, alleging violation of the First Amendment’s guarantee of religious freedoms. The sign ordinance that was struck down had allowed directional signs, such as those put up by the church inviting people to Sunday worship, to be no larger than 6 square feet. They had to be placed in public areas no more than 12 hours before an event and removed within an hour of its end. Signs for political candidates and real estate agents, by contrast, were allowed to be up to 32 square feet and stay in place for several months.

Lower federal courts upheld the town’s sign ordinance, saying the distinction it drew between different kinds of temporary signs was not based on what a sign said.

Justice Clarence Thomas rejected that argument in his majority opinion for six of the nine justices. Thomas said political signs are “given more favorable treatment than messages announcing an assembly of like-minded individuals. That is a paradigmatic example of content-based discrimination.” Under the rigorous review the court gives to laws that treat speakers differently because of content, the law must fall, Thomas said.

Justice Elena Kagan said she fears that all sign ordinances now will have to face the same strict review and many “are now in jeopardy” because of Thursday’s decision. There was a narrower way to decide the case in the church’s favor: The town’s defense of its sign ordinance was marked by the “absence of any sensible basis” for distinguishing between signs and did not pass “even the laugh test,” she said.

Thomas said the decision would not prevent cities and towns from regulating signs to take account of safety and aesthetic concerns. But Gilbert Town Attorney Michael Hamblin said the ruling will make it exceptionally hard for cities across the nation to regulate signs, and it will be a special problem for Arizona because of a state law specifically allowing political signs.

“All municipalities throughout the country and especially in Arizona are going to have to review this matter,” said Hamblin. “Arguably, the contention is if you allow political signs in the right of way for these periods of time then you can’t make distinctions for other types of signs.”

But the attorney for the church, David Cortman of the Scottsdale, Arizona-based Alliance Defending Freedom, said the fears of cities were overblown.

“I think it’s an overstatement. I don’t think the sky is falling, nor will it,” Cortman said. “Towns and municipalities have many different ways to regulate signs in a constitutional fashion.”

The Becket Fund for Religious Liberty submitted an amicus brief in the case. “It’s [the ruling] a very important principle saying that religious people and institutions cannot be treated as second-class citizens,” Eric Rassbach, senior counsel, told Hamodia. “In the broad sense, it means that religious speech cannot be disfavored … in any public venue.”

Mr. Rassbach said that the fullest application of the decision meant that a group could not be barred from any public forum on the grounds that it is religious, without the government showing a compelling reason to do so. He added that prior to this ruling, the guidelines of “content law” were very unclear and had been subject to conflicting decisions in lower courts, and Gilbert has brought much-needed clarity to the issue.

Some contrasted the ruling to another handed down on the same day saying that the State of Texas has a right to restrict the image of a Confederate flag on license plates.

The differing outcomes were, at first glance, hard to reconcile, several scholars said. “If you put these cases side by side, the results look very strange,” said University of Chicago law professor David Strauss.

“Really, I do not think that the two cases are connected at all,” said Mr. Rassbach. “All the justices agree that there is something called government speech and everybody agreed in Reed that the discussion was about private speech.”

The court’s decision in the Texas case focused on categorizing license plates as a statement of the government rather than that of individual owners.

“I think that the license plate case will be used for [laws about] license plates,” said Rassbach. “But Reed could have long-term effects on the rights of religious groups to speak in the public forum.”