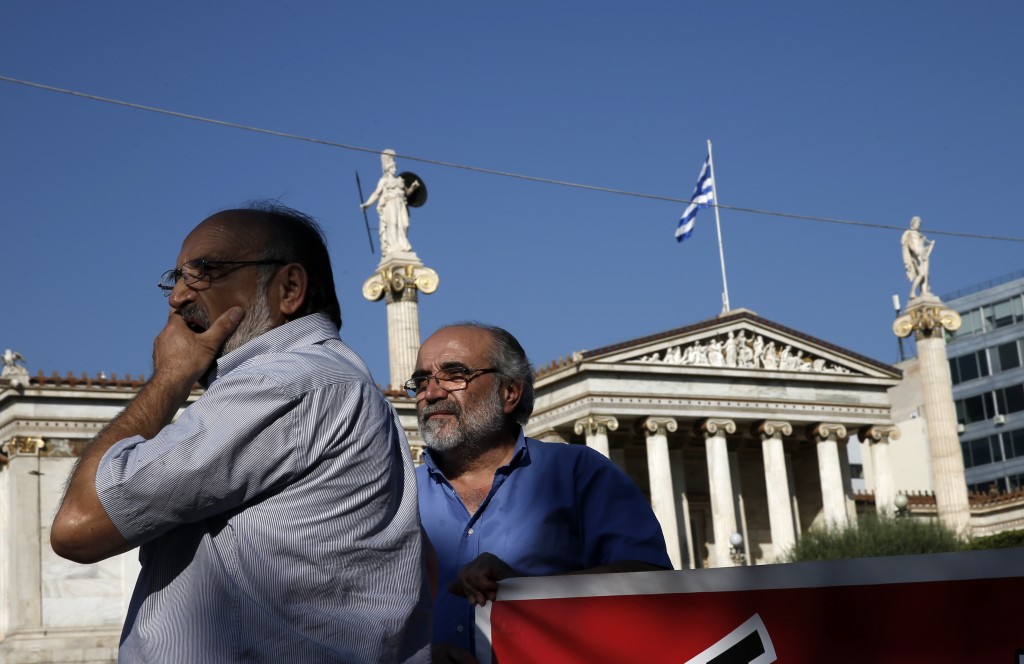 Greece’s government on Tuesday defended the billions worth of “harsh” new budget savings it has offered in talks with creditors, as some of the governing party’s own lawmakers spoke out against them.

Greece has proposed measures worth 8 billion euros ($9 billion), including increases to company and consumer taxes, to persuade the country’s bailout creditors to release new loans it needs to avoid defaulting on its debts next week.

A decision is expected this week: Eurozone finance ministers are to meet Wednesday evening, followed by a European Union summit Thursday and Friday.

Greece needs a decision before June 30, when its current bailout expires and it also faces a 1.6-billion-euro ($1.8 billion) loan repayment to the International Monetary Fund.

The government is also under pressure from other left-wing parties and trade unions, who say its proposals will place further burdens on austerity-weary Greeks. Late Tuesday, 7,000 members of a Communist Party-affiliated trade union and 3,000 pensioners held a peaceful protest march through Athens, demanding that the government withdraw its proposals and restore pensions to pre-crisis levels.

Tsipras’s far-left Syriza party came into power in January on a promise to repeal the harsh budget cuts and tax increases that previous governments had imposed since 2010 in return for bailout loans.

Tsipras says such measures have been focusing too closely on healing public finances while worsening the economic plight of Greeks.

But with creditors withholding 7.2 billion euros ($8 billion) worth of rescue loans and Greece’s state coffers running dry, Tsipras has been forced to backtrack on many pledges. A debt default by Greece could result in much greater economic pain for the country – a potential run on the banks and even an exit from the 19-nation euro currency union.

On Tuesday, Tsipras’s government found it had some explaining to do to its own party and backers.

“There is full comprehension that there are measures in the proposal that are harsh, and they are measures that under different circumstances, if it was up to us, there was no way we would have taken,” government spokesman Gabriel Sakellaridis told the private Greek media station Antenna.

Sakellaridis noted that the proposed measures seek to increase taxes on those with higher incomes rather than on low-income families, salaried employees and pensioners.

But some party members were not swayed.

The proposals “cannot be supported, cannot be voted for,” Syriza party lawmaker Eleni Sotiriou was quoted as telling the weekly Dromos tis Aristeras. “The responsibility for the political developments regarding the submission of such measures will lie with those who made these choices.”

“Such an agreement cannot be voted on,” he told To Vima radio. “The deal toward which we are moving is a deal which, by common admission, has nothing to do with our program.”

Labor Minister Panos Skourletis insisted that the proposal, if accepted by the creditors, was a good one for Greece that included beneficial measures for workers.

A deal that will ensure Greece remains in the eurozone is likely to have enough parliamentary votes to pass, as some opposition lawmakers will almost certainly vote in favor. But significant losses from the governing coalition of Syriza and its coalition partner, the small ANEL nationalist party, would be a blow to Tsipras and could lead to early elections.

ANEL said Tuesday that any agreement with Greece’s creditors should be linked with some form of debt relief.

“Clearly, a government that doesn’t have the confidence of its deputies can’t stand up. But I don’t think we’ll get to this point,” Sakellaridis said.

The uncertainty of the past few months has further hammered the Greek economy, while worried Greeks have pulled billions out of domestic banks for fear of restrictions being imposed on banking transactions or of the country leaving the euro.

The government’s proposal “is clearly moving in the right direction” to ensure the country can maintain international funding “and avert a disorderly path towards bankruptcy,” said Simos Anastasopoulos, the head of the American-Hellenic Chamber of Commerce.

“On the other hand, the proposed measures put the burden on the private economy,” he said, adding that the new taxes are certain to “lead to recession and an increase in unemployment.”

After a series of meetings in Brussels on Monday, European creditors say Greece’s new reform proposals offer a good basis to break a nearly five-month deadlock in talks over new loans.

Greece’s new proposals “are tangible elements we can work with in an efficient way to reach an agreement,” French Finance Minister Michel Sapin said. “We need one last push (Wednesday) night so that the heads of state can sign off on the agreement.”

The IMF sounded less optimistic, with Lagarde describing the proposals as “still short of everything that we expected.”

Hopes that a deal was at hand nevertheless boosted European markets. The Stoxx 50 index of European shares was up 1.1 percent, adding to the previous day’s big gains of 4.1 percent. In Athens, the stock exchange closed up 6.1 percent, after closing up 9 percent on Monday.