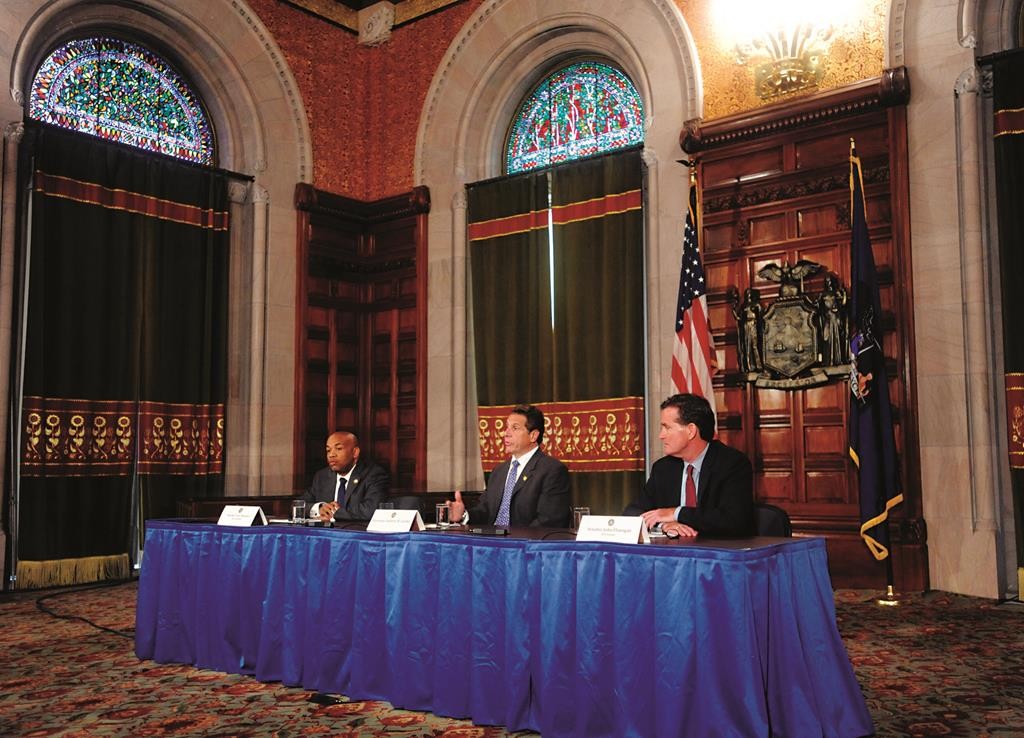 Gov. Andrew Cuomo, Senate Majority Leader John Flanagan and Assembly Speaker Carl Heastie arrived at an agreement Tuesday afternoon at a Capitol press conference that would extend New York City rent regulations for four years, mayoral control of the New York City school system for one year, and an affordable housing tax credit known as 421a for half a year.

In return, the state’s leaders will pay back most of the debts accrued over the past 12 years for various mandated services the yeshivos and other private schools perform. But rather than the tax credit that would help yeshivos every year, the $250 million is a one-time payment that will not be renewed every year.

It also is only a partial payback for the $300 million owed to private schools since 2004.

Out of the 400,000 private school students in the state, 135,000 attend more than 200 yeshivos. Accordingly, the yeshivos would get approximately $83 million.

The public school system, on the other hand, educates about 1.2 million students and has a $24 billion budget.

The announcement was greeted with bitter disappointment by community officials, who had thought this year represented the best chance in decades for significant aid that would go directly to parents, not to yeshivos.

“It’s a shanda! Just unconscionable!” said state Sen. Simcha Felder in an emailed statement. “The Assembly and governor once again have failed tuition-paying parents. They continue to tell us, ‘Pay your taxes like every New Yorker, but we’ll treat you like second-class citizens — with nothing in return.’”

Felder, a Democrat representing a heavily Orthodox district in Brooklyn, has invested a vast amount of political capital in attempting to ferry an education tax credit across the finish line. He sponsored a bill, which passed the Senate in January, that would allow donors to a private school scholarship fund a 90 percent tax deduction on their state tax bill.

Felder was upstaged last month  when Cuomo presented his own bill that would grant the tax deduction, plus add a $500 per child tax credit for low income families.

Groups such as Agudath Israel of America embraced Cuomo’s proposal, which was known as the Parental Choice in Education Act. Cuomo, who told Hamodia that he was “disappointed in myself” for not getting tuition relief earlier this year, even attended a rally at a Flatbush yeshivah during a rare visit in May to the Orthodox neighborhood.

In a statement, Rabbi Chaim Dovid Zwiebel, Agudah’s leader, said that he was “deeply disappointed” that the legislature had ignored the Orthodox and other religious communities this year.

“It is no secret that Agudath Israel of America has long been a strong advocate for passage of education tax credit legislation in New York. We had cause to be hopeful that this would finally be the year that such legislation would be enacted, as the Senate passed an outstanding tax credit bill at the very outset of the session and the Governor proposed his own exemplary Parental Choice in Education bill. … Unfortunately, however, the Assembly did not pass any bill of its own, and ultimately blocked tax credit legislation.”

“To put it mildly,” Rabbi Zwiebel said, “this is deeply disappointing.”

One activist heavily involved in the negotiations told Hamodia that there is no way the deal can be construed as a victory for the yeshivos.

“This is very, very disappointing,” said the activist. “You’re paying back old debts from years ago. This is only a one-shot deal. They owe us $300 million since 2004 and they didn’t give us anything now.”

Felder, in his statement, echoed that sentiment.

“To add salt to the wound, community representatives, activists, and organizations are going to praise the Assembly and governor for allocating $250 million directly to schools. This is money owed them from previous years. The promise was to help parents,” he said. “The Assembly and governor just don’t care about tuition-paying parents — period! They must think we are clueless. We’re not — and we won’t forget this.”

One group that praised the agreement was the Orthodox Union, who said that it represented “the largest amount ever allocated to [the mandated services] program.”

“While we are disappointed that our lawmakers turned down the education tax credit bill, which would have incentivized hundreds of millions in donations to our schools,” said Allen Fagin, the OU’s executive vice president and CEO, “we are grateful for this historic level of funding for non-public school education.”

The yeshivos must perform certain services on behalf of the state, such as take attendance, distribute tests and give immunization shots. These are known as “mandated services,” and the state pays the yeshivos back for these services.

However, every year, the state has paid less than the amount owed, leading to a cumulative $300 million debt. The agreement signed Tuesday, which will be voted on by both chambers on Wednesday, pays back part of it.

The Agudah statement said that while the $250 million “is by no means a consolation prize for its failure to enact tax credit legislation, it is, nonetheless, a significant and welcome development.”

“We came close this year to accomplishing something historic,” Rabbi Zwiebel declared. “We’ll be back again next year.”