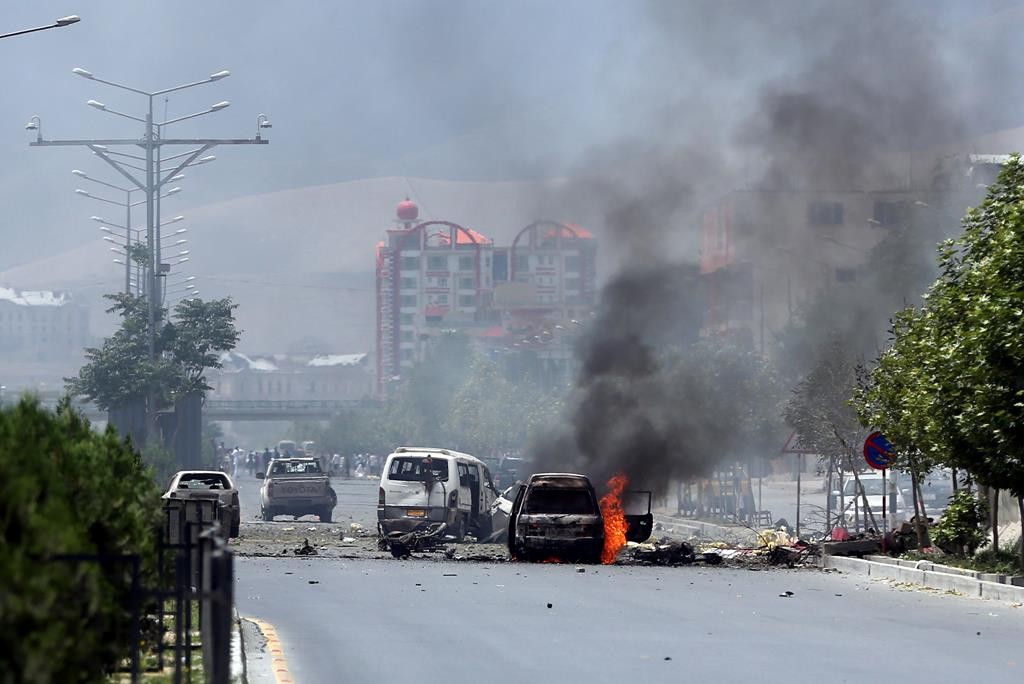 A Taliban suicide bomber struck the entrance to the Afghan parliament on Monday and gunmen tried to storm the heavily guarded compound, setting off a gunbattle with police that left two people dead as lawmakers were meeting inside to vote on the appointment of a new defense minister.

Afghan security forces managed to repel the attack, killing all seven gunmen and ensuring that no members of parliament were harmed. But the audacious assault came as the Taliban captured two districts in as many days in the country’s north, displaying their ability to operate on multiple fronts.

Interior Ministry spokesman Sediq Sediqqi said the attack began with a car bomb explosion near the entrance to parliament. Gunmen then attempted to storm the compound but were pushed back by security forces and eventually corralled into a nearby building that was under construction.

Sediqqi later said all seven attackers were killed by police and that no members of parliament were harmed. He said a woman and a 10-year-old girl were killed. Health Ministry spokesman Mohammad Ismail Kahousi said 31 civilians were wounded.

The Taliban claimed responsibility for the attack. The terrorist group’s spokesman, Zabihullah Mujahid, told The Associated Press by telephone that it targeted Stanekzai and the parliament itself. He said the assault showed the “capability of the mujahedeen, who can even attack the parliament in the capital.”

An Associated Press reporter who witnessed part of the assault heard heavy gunfire outside parliament and saw smoke billowing from the entrance as ambulances raced to the scene. The reporter later heard sporadic shooting from the building where the terrorists were said to be holed up.

Just down the street, hundreds of children were evacuated from a school. Parents could be seen racing toward the building, shouting out the names of their children.

“Targeting innocent people [during] Ramadan is a clear act of hostility against the religion of Islam,” his office said in a statement, adding that the perpetrators “are criminals who are bound by no creed or religion.”

In Washington, State Department spokesman John Kirby said the U.S. condemned the attack, which he said “demonstrates the gulf between the Taliban and the people of Afghanistan, and shows blatant disregard for human life and for democracy.”