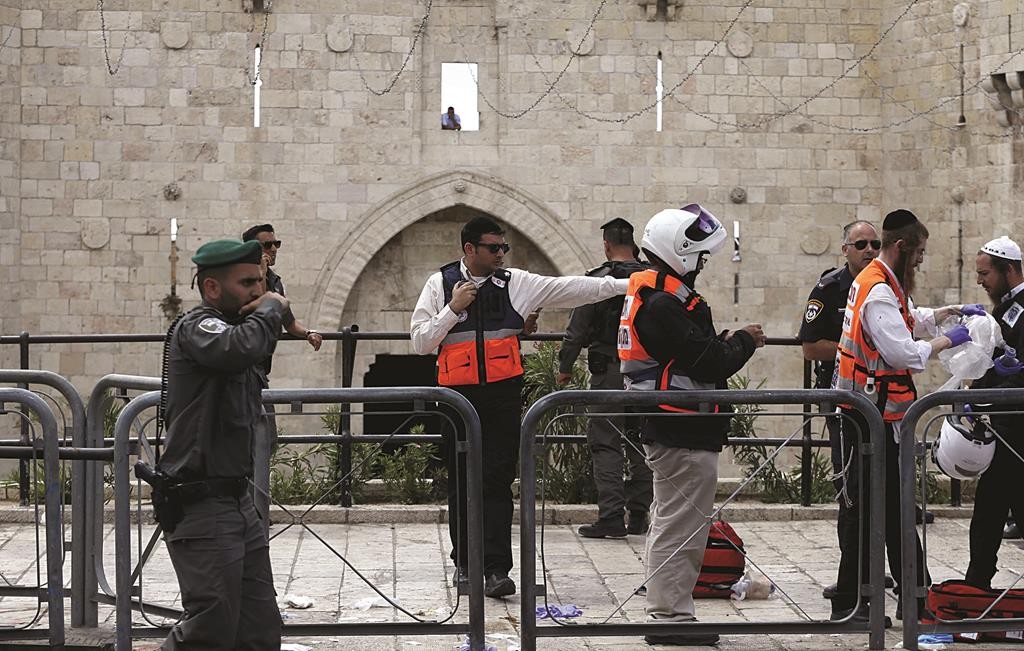 Two separate terrorist attacks, one on Friday and the other on Sunday, left one Israeli Jew dead and a policeman in serious condition.

In Friday’s incident, Danny Gonen Hy”d, 25, was shot and killed by a Palestinian near the Jewish community of Dolev, 17 miles northwest of Yerushalayim, in the Binyamin region. Another man was wounded in the attack.

Security sources said the gunman flagged down the victims’ car, asked them a question, and then opened fire with a 9 millimeter handgun.

“One of the wounded arrived with no vital signs and the medical team pronounced him dead. The other man is lightly wounded and is receiving treatment,” a spokeswoman for the Sheba Medical Center hospital said.

Israeli authorities announced last week that there would be an easement of entry restrictions into the capital so that Palestinians from Yehudah and Shomron and the Gaza Strip could visit during Ramadan. However, there was no known link between the goodwill policy and the latest attacks, at least as of Sunday night.

Prayers at Har Habayis, attended by an estimated 80,000 Muslims on the first Friday of Ramadan, passed quietly under a heavy police presence.

The IDF launched a manhunt immediately after the killing on Friday, but by Sunday the search had concluded without results and the investigation was handed over to the Shin Bet (Israel Security Agency), The Jerusalem Post reported.

Gonen, a resident of Lod, was laid to rest in the Lod Cemetery on Motzoei Shabbos.

Rabbi Yisrael Samet of Lod spoke of Danny as an activist who strove to promote Jewish observance in the city.

“Everybody loved him. They all knew that if they needed help, he was the address to go to,” Rabbi Samet said during an interview with Arutz Sheva.

“Danny loved Torah. He was always interested in and involved in one Torah project or another,” recalled Rabbi Samet. “He was also seeking to know more. Danny searched relentlessly for the truth, and would not let a question rest until he had clarified it as much as he possibly could.”

Lod’s Mayor Yair Revivo noted that this is his mother’s third tragedy in three years. Both her husband and granddaughter passed away, before her eldest son Danny was killed.

“The city of Lod bows its head in response to the murder of one of its sons, Danny Gonen, in a terror attack at the hands of a vile terrorist murderer,” Revivo said.

“This heinous act of murder reminds us of the painful reality that atrocities are carried out against Jews, simply because they are Jews.”

Israel Radio reported that Hamas claimed responsibility for the shooting, but this had not been confirmed.

On Sunday morning, more innocent Jewish blood was spilled, as a Palestinian from Chevron stabbed a border policeman in the neck near Yerushalayim’s Old City’s Damascus Gate.

“The terrorist, who is from Chevron, stabbed him from behind in the neck, seriously wounding the officer, who drew his pistol and was able to shoot him,” said Police spokesman Micky Rosenfeld.

Both were listed in serious condition.

Police moved in to cordon off the area to prevent the possibility of more attacks until they had determined that the suspect acted alone.

Later on Sunday, a slight improvement in the medical condition of the border policeman was reported.

Dr. Ofer Merin, Director of the Trauma Unit at Shaare Zedek Hospital in Yerushalayim, said that the wounded officer had undergone surgery and his condition was still serious.

On Sunday night, the violence continued with another stabbing, in which two Israelis were reported in serious condition in an attack at Damascus Gate, outside the Old City.

Paramedics and police were called to the scene.

Also over Shabbos, stones were thrown at a bus and a private vehicle, lightly injuring the driver. A 16-year-old Palestinian was later detained by police on suspicion of involvement in the incident.