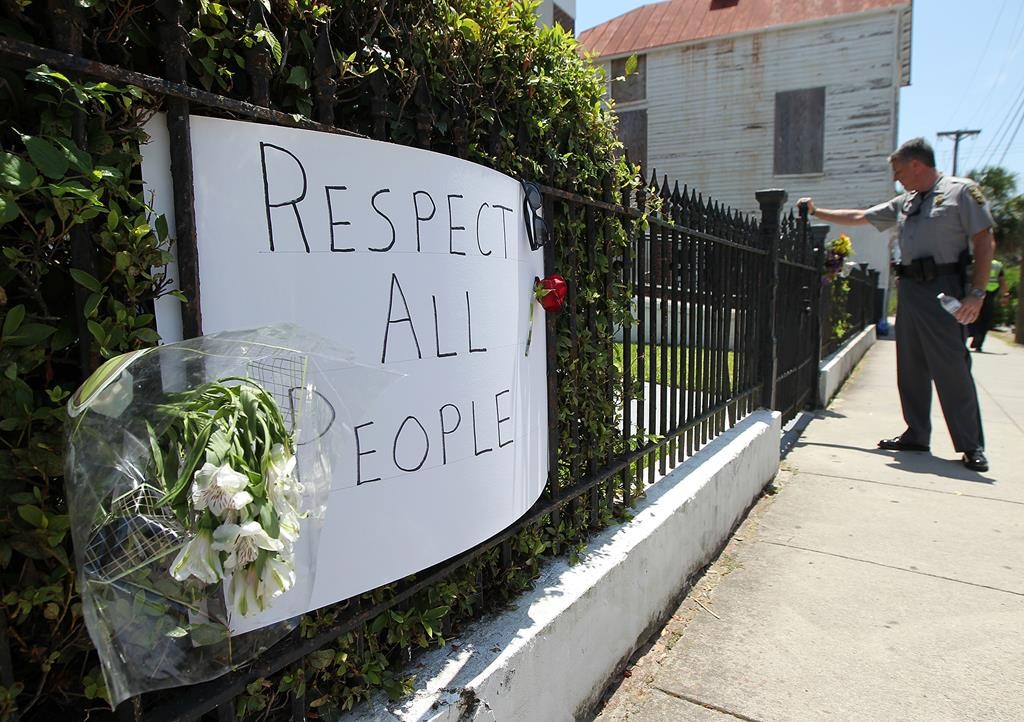 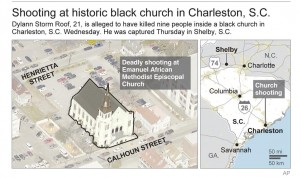 A white man who joined a prayer meeting inside a historic black church and then fatally shot nine people was captured without resistance Thursday after an all-night manhunt, Charleston’s police chief said.

“At some point, we as a country will have to reckon with the fact that this type of mass violence does not happen in other advanced countries,” Obama said.

Pinckney, 41, was a married father of two who spent 19 years in the South Carolina legislature. He became the youngest member of the House when he was first elected as a Democrat at 23.

“He had a core not many of us have,” said Sen. Vincent Sheheen, who sat beside Pinckney in the Senate. The other victims were identified as Cynthia Hurd, 54; Tywanza Sanders, 26; Sharonda Singleton, 45; Myra Thompson, 59; Ethel Lance, 70; Susie Jackson, 87; the Rev. Daniel Simmons Sr., 74; and DePayne Doctor.

Charleston authorities put out photos of the suspect from the church’s surveillance camera early Thursday. Later that morning, authorities west of Charlotte, North Carolina, got a report of a sighting of the suspect’s car headed west, said Jeff Ledford, the police chief in Shelby, North Carolina. Officers pulled over the driver and arrested Roof just before 11 a.m., about 14 hours after the attack.

A gun was found in the car, Mullen said.

The shooting evoked painful memories of other attacks. Black churches were bombed in the 1960s when they served as organizing hubs for the Civil Rights movement, and burned by arsons across the South in the 1990s. Others survived shooting sprees.

This particular congregation, which formed in 1816, has its own grim history: A founder, Denmark Vesey, was hanged after trying to organize a slave revolt in 1822, and white landowners burned the church in revenge, leaving parishioners to worship underground until after the Civil War.

“Of all cities, in Charleston, to have a horrible, hateful person go into the church and kill people there to pray and worship with each other is something that is beyond any comprehension and is not explained,” Riley said. “We are going to put our arms around that church and that church family.”

“Today I feel like it’s 9-11 again,” Bob Dyer, who works in the area, said after leaving an arrangement of yellow flowers wrapped in plastic. “I’m in shock.”

The attack came two months after the fatal shooting of an unarmed black man, Walter Scott, by a white police officer in neighboring North Charleston, which increased racial tensions. The officer awaits trial for murder, and the shooting prompted South Carolina to pass a law, co-sponsored by Pinckney, to equip police statewide with body cameras.