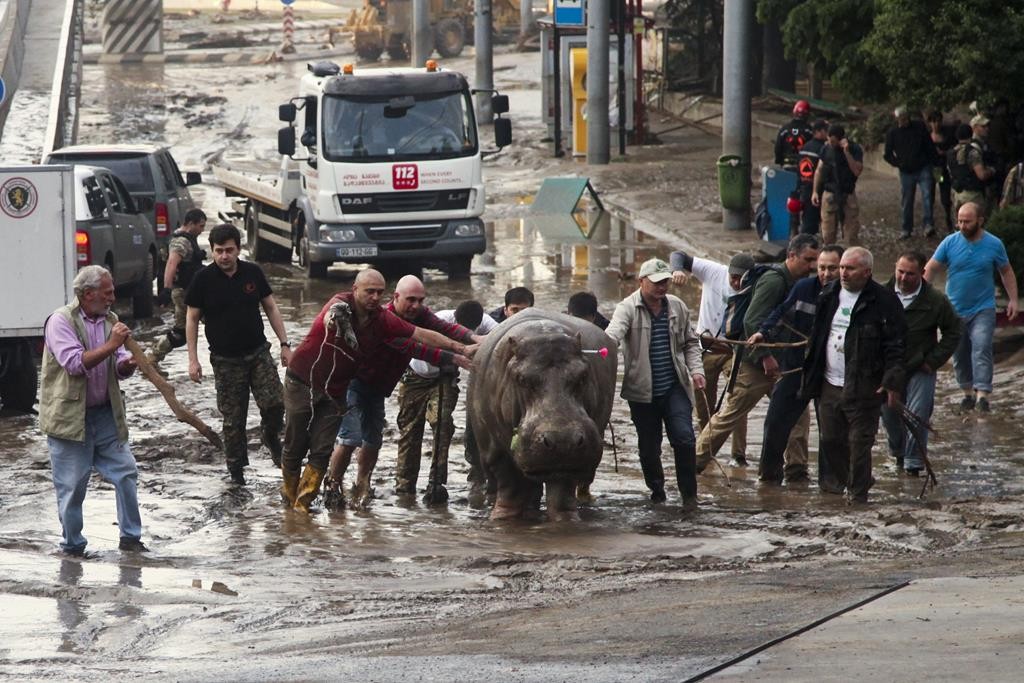 Severe flooding in the Georgian capital left at least 12 people dead Sunday and triggered a big-game hunt across the city for lions, tigers, a hippopotamus and other dangerous animals that escaped from Tbilisi’s ravaged zoo.

Residents were warned to stay indoors as police conducted the hunt, but fear deepened as night fell on the city of 1.1 million with some of the animals still on the loose.

“The daytime wasn’t bad,” said resident Khariton Gabashvili, “but tonight everyone has to be very careful because all the beasts haven’t been captured. They haven’t been fed, and in their hungry state they might attack people.”

Heavy rain turned a normally pleasant city stream into a fierce torrent that destroyed or damaged hundreds of homes in the former Soviet republic. Officials said 12 people were known to have died and about two dozen others were missing.

There were no immediate reports that any of the dead were killed by the animals, which ran off after the floodwaters destroyed their enclosures. Among the beasts that escaped were bears, wolves and monkeys.

A hippopotamus — an extremely aggressive animal with the ability to run faster than humans in short bursts — was spotted lumbering through a flooded square not far from the zoo and was shot with a tranquilizer dart. Other animals were hunted down and killed.

The carcasses of at least a lion, a boar and a tiger were seen, and zoo authorities said six wolves were also dead.

Zoo spokeswoman Mzia Sharashidze said a count of the escaped animals was not immediately possible because so many of the zoo’s enclosures were under water.