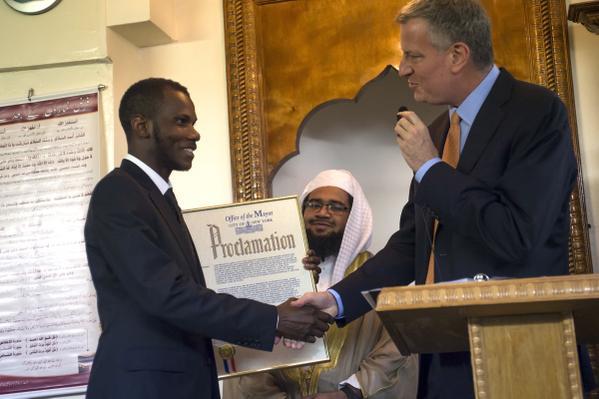 Lassana Bathily, who worked at Hyper Cacher, “risked his own life” by hiding customers in a freezer while a terrorist rampaged upstairs when the store was the target of a terror attack on Jan. 9.

Bathily, 25, an immigrant to France from Mali, escaped the store through a hidden elevator and gave police surrounding the building the key to the rollup gate. That allowed them to storm the store while minimizing the threat to the lives of hostages.

“Lassana inspires us,” said de Blasio, who visited the site days afterward. “Because he protected people, people who didn’t necessarily come from the same country, or practice the same faith, or have the same skin color, but for Lassana, they were fellow human beings worthy of protection.”

Bathily’s actions provided France with a heroic figure after the deadly violence that began with the Jan. 7 attack on the satirical magazine Charlie Hebdo.