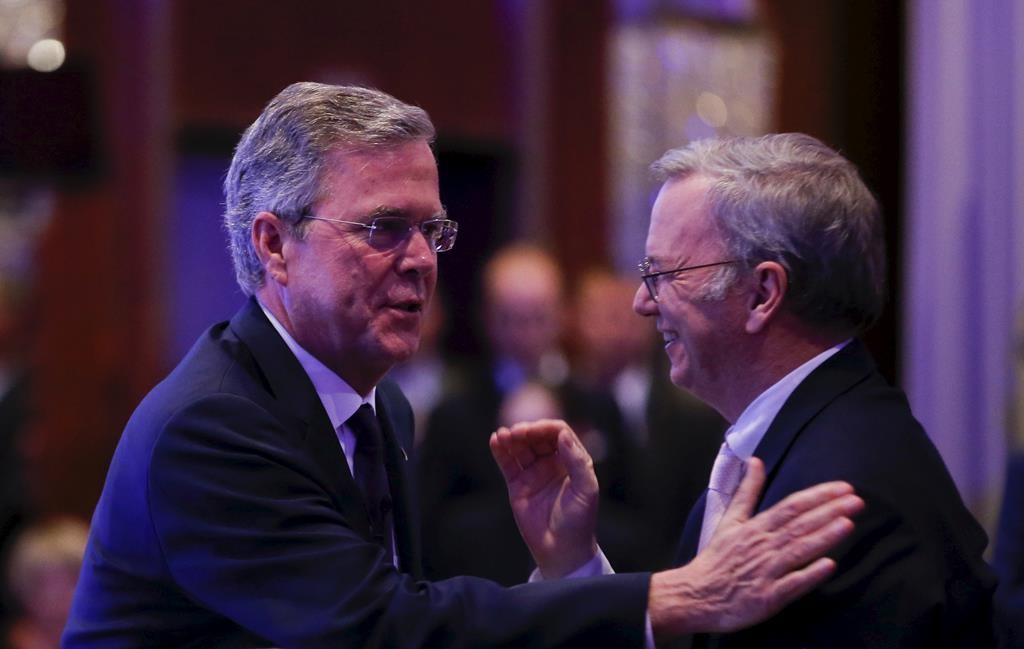 Seeking to burnish his credentials as a plausible commander-in-chief, Jeb Bush stepped up his criticism Wednesday of Vladimir Putin, calling the Russian president “a bully” who should be restrained.

On the second day of a three-nation European tour before he formally announces his campaign for president, the former Florida governor called for a more robust international response to counter Russian military support for separatists in eastern Ukraine.

“He’s a bully,” Bush told reporters here. “And … you enable bad behavior when you’re nuanced with a guy like that.”

But Bush struggled to differentiate himself from current U.S. policy in the region.

He said the North Atlantic Treaty Organization ought to consider permanently stationing troops in Poland and Baltic nations that are on the front lines of the conflict. Members of the security alliance, including the United States, have considered and rejected that proposal in the past.

The Obama administration and other NATO governments instead have rotated more troops through those countries, and stepped up military exercises, intelligence sharing and regional air and sea patrols since early 2104, when Russia effectively annexed the Crimean peninsula in Ukraine.

But wary of making the kind of gaffes that have caused stumbles for other presidential aspirants, the latest member of the Bush family to seek the Oval Office repeatedly declined to lay out specific policy proposals on his European trip.

“Look, I’m here to learn, to listen and learn, and get a better sense of all this. I don’t come to offer five-point plans,” Bush said in response to questions about whether the U.S. military should play a stronger role in the region.

Bush again declared the failure of the proposed “reset” of U.S. relations with Russia, referring to efforts to improve U.S. ties with Moscow shortly after Obama took office in 2009. Putin was then prime minister under Russian President Dmitry Medvedev. Relations have soured steadily since Putin, who had previously served as president, was re-elected in 2012.

Bush, who will formally kick off his presidential campaign Monday in Florida, pushed back at suggestions that he has failed to take a commanding lead in the GOP race, or that a leadership shakeup in his campaign staff this week signaled trouble.

“It’s a long haul,” Bush said. “You start wherever you start, and you end a long way away from where we are today, so I just urge everybody to be a little more patient about this.”