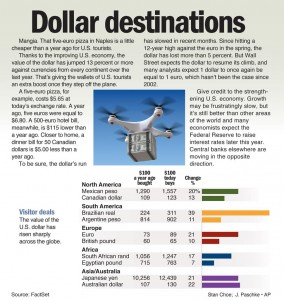 With little news to drive trading, major market indexes drifted mostly lower in a listless day of trading on Tuesday. Bond prices fell, driving a benchmark interest rate to its high for the year, and crude oil jumped back above $60 a barrel.

John Canally, an investment strategist at LPL Financial, expects the market to coast until the Federal Reserve meets next week. “Basically, we’re in a waiting period for the Fed,” he said. “Today is probably what you can expect for the rest of the week: a lack of direction.”

The major indexes have lost ground in recent weeks as investors speculated over the Federal Reserve’s next move. Many think an improving economy will push the Fed to raise its benchmark interest rate later this year for the first time since the Great Recession. A solid jobs report on Friday suggested that the economy has started to recover from its winter slump.

Prices for U.S. government bonds dropped Tuesday, sending the yield on the 10-year Treasury note to a new high for the year, 2.44 percent. Signs that the economy has started to shake off its winter slump have driven long-term interest rates up over the past two months.

In other trading, United Natural Foods, a supplier to Whole Food Markets and other stores, slumped 5 percent after it posted results that fell short of analysts’ targets late Monday. It also cut its full-year forecast for profits. The company’s stock dropped $2.92 to $60.74.

HSBC Holdings, Europe’s largest bank by market value, fell 1 percent in London after it said it was slashing jobs and shifting its focus toward Asia, where it has a large and growing business.

The price of oil surged as an Energy Department monthly report predicted a decline in U.S. output later this year and next. Benchmark U.S. crude jumped $2.00 to close at $60.14 a barrel in New York. Brent crude, a benchmark for international oil used by many U.S. refineries, rose $2.19 to close at $64.88 in London.

In other futures trading:

This article appeared in print on page 36 of the June 10th, 2015 edition of Hamodia.