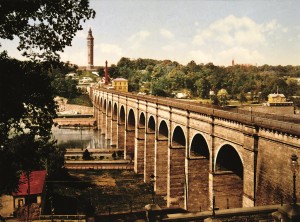 A pedestrian bridge that brought needed water resources to Manhattan in the 19th century but fell into disuse in the 1970s was officially reopened to the public on Tuesday, offering downtown views and a connection between Manhattan and the Bronx.

The grey clouds couldn’t dampen the enthusiasm of the crowd at the High Bridge, many of whom wore bright blue Department of Parks and Recreation hats, signifying their contribution to the countless hours of work that went into restoring the bridge.

Community members and elected officials from the Bronx walked across the bridge and met their Manhattan counterparts in the middle.

The High Bridge was built in 1848. It spans the Harlem River, connecting Manhattan’s Washington Heights and the Bronx’s Highbridge neighborhoods. The 123-foot-high, 1,450-foot-long bridge once attracted thousands of visitors who came to enjoy the spectacular views and surrounding green spaces. However, by the mid-1960s that all began to wane with construction of the Major Deegan Expressway and the Harlem River Drive.

“This is almost like the eighth wonder of the world,” Brewer said.

This article appeared in print on page 20 of the June 10th, 2015 edition of Hamodia.