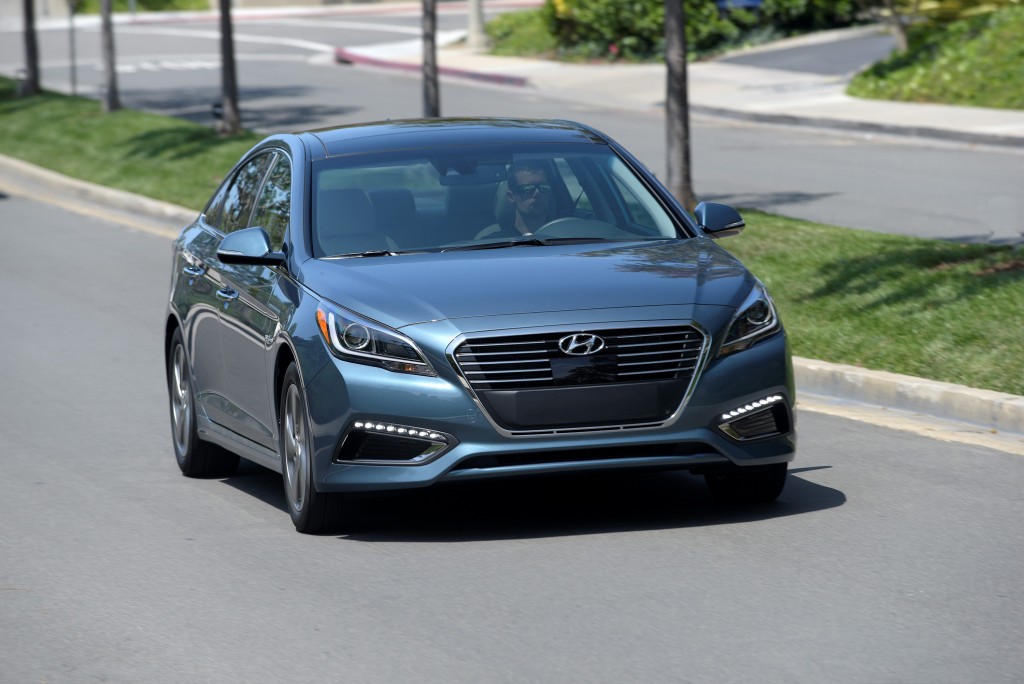 It’s a predictable truism of gas prices that what goes down eventually climbs back up. In the last month alone, gasoline has increased 75 cents per gallon in California, nudging it over $4 for the first time since last year.

Hybrids, it seems, might stand a chance after all, following a massive consumer defection out of fuel-efficient vehicles into super-sized SUVs. And if that’s the case, Hyundai’s first-ever plug-in hybrid could be perfectly poised to take advantage of the reverse tide when it comes on the market this fall.

Hyundai has offered its Sonata midsize sedan as a hybrid for years. But for 2016, it’s supplemented with a plug-in version that can travel up to 24 miles as an all-electric vehicle and 605 miles per fill-up using gas and electricity combined.

Most all-electric cars can be had in a predictably blasé shape: They’re eggy hatchbacks. Midsize sedans being the best-selling car class in the U.S., and the Sonata being the Korean automaker’s sales leader, Hyundai is following the example led by Honda (with its plug-in Accord) and Ford (with its Fusion Energi). It’s a vehicle that lets mainstream consumers dip their toes into the waters of EV ownership without the cost-prohibitive and range-restricting sacrifice.

Like its plug-less hybrid sibling, also updated for 2016, the Sonata plug-in hybrid electric vehicle, or PHEV, uses a 2-liter gasoline engine coupled with a compact permanent magnet synchronous motor. The lithium-ion batteries eke out more power and energy than they did in the outgoing hybrid. At 9.8 kilowatt hours, the PHEV boasts the largest battery pack among its competitors and fuel economy that’s unheard of for hybrids without a plug: 93 mpg equivalent.

That’s a lot of gas money that can be diverted to groceries or child care or tennis balls. Whatever fuels your fire, the Sonata PHEV forces efficiency upon the driver, defaulting, when charged, to all-electric mode every time the driver turns over the ignition unless the driver consciously selects hybrid.

As an EV, the car is pleasingly sprite and surprisingly quiet. Best for city driving, its top EV-only speed is 75 mph. Switch to HEV, and it will drive as a hybrid to maintain its battery charge level. Best used for monotonous highway miles, HEV saves its EV capacity for when it’s most effective — at lower, city speeds.

I spent a day behind the (heated) steering wheel of the Sonata PHEV. Driving it was luxury-level quiet, even at speed. Defaulting to EV mode for takeoffs had a performance advantage, as well: the cheap thrill of the electric motor’s instant torque.

The Sonata PHEV’s interior is the same as the gas-powered version, with the exception of its dash. Instead of the usual tachometer, it has an EV power mode that shows when the car is drawing electricity from the battery or adding to it through regenerative braking. Like the new EV it is, it proudly spells out in bold digital type exactly how much all-electric range it’s got.

And, as in many eco-oriented cars, at any time during my drive I could check in on my “driving style” and easily see if it was economical, normal or aggressive. I’ve always been something of a lead foot, so I was surprised to see that after 50 miles behind the wheel my style was 0 percent aggressive, 87 percent economical. Making a conscious effort to stomp it coming off of a green light, I was only able to get my aggression level to 1 percent.

The PHEV is available in two versions. I was driving the more-loaded Limited model, which adds advanced safety features like lane-keep assistance. It also upgrades the seats to leather, but not to a caliber that’s olfactory, and increases the center-console screen to an easier-to-read 8 inches.

That screen, however, doesn’t take full advantage of the fact that it’s operated by touch. The climate controls are still separate buttons that are lined up like little soldiers along its bottom. The toggles for its drive modes and electric and hybrid settings are likewise actual buttons. At least they are intuitively laid out and easy on the eyes —more premium feeling than one would expect for its nameplate.

Most of the 200 miles and five hours I spent back to back in the PHEV and plugless hybrid were along the coast and on the highway. And while the hybrid powertrains were smooth and efficient, what was most striking about both cars was how comfortable they were to drive.

The overall feel of the car is comfortably languid. Its handling and ride quality are more cozy than sporty, its steering more soft than taut.

Power front seats that are heated and ventilated are standard; heated rear seats are available as an option. As a whole, the interior was spacious, its seating roomy. Even in the back seat with the front seats pushed all the way back, my femurs weren’t pressed into my hip sockets. My noggin didn’t even come close to the headliner.

My day trip precluded the need to carry luggage, but for the 2016 Sonata hybrids, Hyundai has repackaged the battery to expand its trunk space, moving it from behind the rear seats to under the trunk floor in what is usually the spare-tire well. What to do if you need a spare? Make sure you have AAA. There’s only a tire mending kit attached to the trunk’s wall.

While the interior is largely the same as the gas Sonata, the exterior of both hybrids are more futuristic looking. Form following function, the front grille is equipped with active front flaps to reroute troublesome and turbulent air toward the car’s smooth underbody and past their “eco,” or flat-spoke, wheels for unfettered passage, instead of swirling in their spokes. The corner edges of the rear bumpers were also sharpened to cut fuel-sapping drag.

It’s doubtful Hyundai and Tesla are ever comparison-shopped, but, recognizing that it doesn’t hurt to have at least one thing in common with the aspirational EV, Hyundai proudly declares that its Sonata Hybrid is tied with the Tesla Model S for its nominal coefficient of drag.

The hybrid’s deep-set face isn’t only for efficiency: It hides a radar sensor that enables some of its optional advanced safety features, such as forward collision avoidance and adaptive cruise control. The safety features are included in the more expensive of the two PHEV versions that will be offered. Blind-spot monitoring and lane-keep assistance are also included and work well: i.e., unobtrusively.

They are, however, the one area in which Hyundai’s budget-conscious rep is most apparent. The tone quality of the beeps it emitted whenever I threatened to wander from my lane without signaling or plow into a compatriot’s bumper was an uninspired bleat.

Pricing hasn’t yet been announced, but the PHEV Sonata will be the most expensive of its three versions. For 2015, the gas-powered Sonata started at $21,975, its hybrid stablemate at $30,325. Industry analysts expect the PHEV to be priced slightly less than its rivals — the $39,780 Honda Accord Plug-in Hybrid and $34,800 Ford Fusion Energi.

The updated 2016 Sonata Hybrid will be available this summer, followed by the plug-in hybrid this fall, starting in California, where more than 50 percent of all PHEVs are sold. The PHEV will eventually be offered in other so-called zero-emissions mandate states, including Connecticut, Maine, Maryland, Massachusetts, New Jersey, New York, Rhode Island and Vermont. Customers who live in other states can still buy the PHEV. They just need to special-order it.