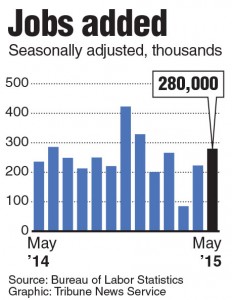 Broad-based and stronger-than-expected hiring by employers in May should put to rest any concern about sluggish U.S. economic growth and the potential for a slide into recession.

Hiring was positive across all major sectors of the economy. The unemployment rate ticked up to 5.5 percent as more people returned to the labor market in search of work.

The strong hiring followed last month’s revision of first-quarter growth numbers, which showed the economy shrank at an annual rate of 0.7 percent from January through March. The weak read of gross domestic product, the sum of U.S. goods and services, prompted concerns about a possible recession.

“Any worries about the economy’s strength given the decline in GDP in the first quarter should be allayed with today’s strong job numbers,” said Mark Zandi, chief economist for forecaster Moody’s Analytics.

The White House cheered the strongest jobs report of 2015.

“I feel good about these numbers,” Jason Furman, head of the White House Council of Economic Advisers, said on CNBC shortly after the jobs report came out.

In his White House blog, Furman noted the economy added 3 million new jobs over the past 12 months, “nearly the fastest pace in more than a decade.”

A solid half-year of hiring and building wage pressures increase the likelihood that the Federal Reserve will hike interest rates this year, perhaps in September. The Fed’s benchmark interest rate influences borrowing costs across the economy. It’s been anchored at near zero since December 2008.

Friday’s report also confirmed that measures of underemployment in the economy are slowly improving. The number of discouraged workers is down over the past year, as is the number of people ending temporary employment.

The so-called unofficial unemployment rate, an alternative measure that includes people hovering just outside the labor force and part-time workers who want full-time work, is now at 10.8 percent. In May 2014 it was 11.7 percent.

Average hourly earnings rose by 0.3 percent in May. Over the past 12 months, worker wages, as measured by the Bureau of Labor Statistics, have risen 2.3 percent. That’s faster than the rate of inflation, and, while not sizzling, is healthy.

MAY BY THE NUMBERS:

Professional and business services, up 63,000

Transportation and warehousing, up 13,100

This article appeared in print in the June 8th, 2015 edition of Hamodia.