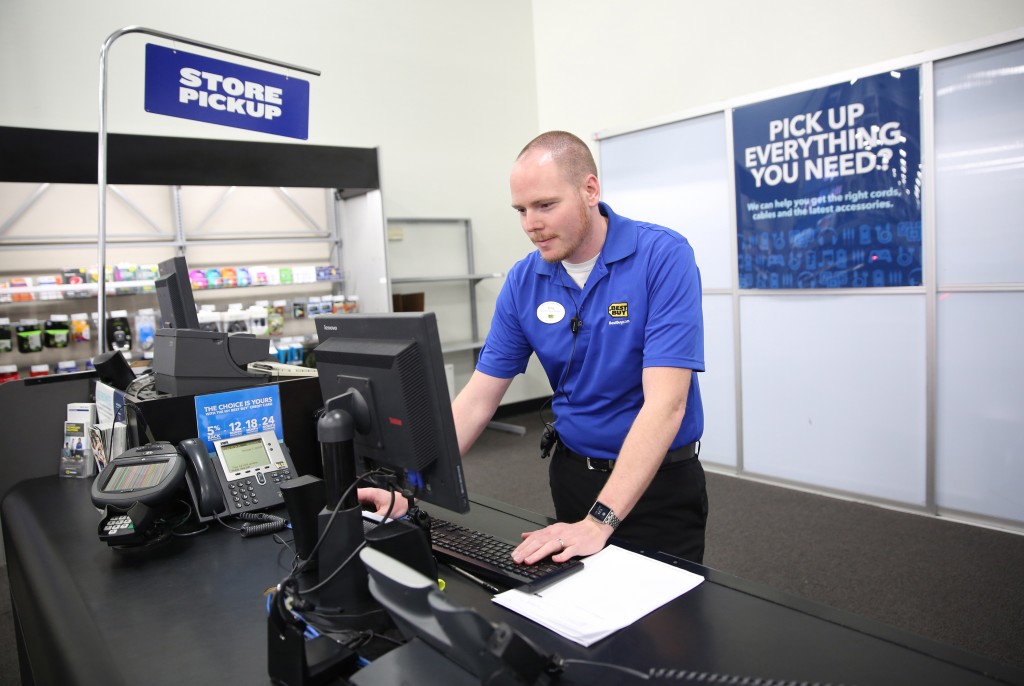 Brick-and-mortar retailers — you know, the dinosaurs doomed in an increasingly digital world — have been unleashing a new weapon to preserve the species: their stores.

From Wal-Mart Stores to Nordstrom, retailers over the last few years have been pushing forward with ways to integrate online and physical shopping, with stores emerging as an asset rather than a liability.

And the strategies don’t necessarily have to be terribly complicated. One approach that has gained widespread acceptance is letting customers buy products online, then go to a store to pick them up.

Doorstep delivery is convenient. But it often costs extra, and it can take a few days. Buy online and pick up in store — for free — and you can put your hands on that new cashmere sweater or Keurig coffee maker almost immediately.

“It’s huge,” Lee Peterson, an executive vice president with retail consultant WD Partners Inc., said of the spreading phenomenon, pioneered by Wal-Mart and Best Buy five years ago and now being adopted across the industry.

“It’s a big part of e-commerce for retailers going forward,” Peterson said. “It’s also a great way to compete with Amazon. … Consumers would rather get it now.”

The newest convert: Kohl’s Corp., which tested in-store pickup for online purchases in 2014 and recently rolled out the service nationwide.

“The benefit for us is really being able to be there for our families and our shoppers when they need something immediately,” said Krista Berry, executive vice president and chief digital officer for the retailer, based outside Milwaukee in Menomonee Falls, Wisconsin.

“We see it as an advantage for us in our 1,200 stores. We’re based on convenience. It’s part of our core DNA. So having someone be able to place an order and then just drive in and pick it up — we’ve seen very positive reactions from our customers.”

It almost sounds like an aside, but the key phrase in Berry’s comments is “our 1,200 stores.”

It’s actually 1,164, but why quibble? The point is that from Bangor, Maine, to San Diego, Kohl’s essentially has more than 1,000 warehouses jammed with apparel from numerous designers and companies. If you’re in a good-sized metropolitan area, there’s probably a Kohl’s nearby.

In Peterson’s view, brick-and-mortar retailers can cash in on consumers’ desire to get it now, and to avoid shipping charges, by viewing their stores as fulfillment centers. They’ve “already done the hard part,” he wrote last year. “They’ve invested in physical infrastructure (stores) with strategic geographic distribution.”

Electronics retailer Best Buy went chainwide with in-store pickup in 2010, and has a well-organized system in place, with the pickup counter clearly marked in each store.

A shopper selects an item online and pays by credit card. Best Buy sends an email alerting the shopper to wait for a second email — typically about half an hour later — confirming that the item is waiting, said Tony Poulos, assistant manager of a Milwaukee-area store.

Experience has taught the store to build in the 30-minute buffer in case the customer changes his mind and wants to cancel, Poulos said. He said Best Buy won’t offer especially fast-moving items for in-store pickup — a new version of the iPad, for example — because it might run out before a clerk can grab one off the shelves,

“It allows us to compete directly with the online competitors that we have in a way they can’t match,” he said.

But buy-online, pick-up-in-store is hardly a magic bullet for brick-and-mortar retailers.

Best Buy’s overall sales, for example, have trended downward on an annual basis over the last five years. Sears, which has emphasized the service and even offers curbside pickup, hasn’t had a profitable year since 2010.

Still, initiatives that blend brick-and-mortar and online shopping are widely viewed as essential for retailers.

Kohl’s has been investing heavily in the technology needed for such efforts. It can now ship online orders from more than 1,000 of its stores, for example. That slashes delivery times compared with shipments from distant warehouses.

“Kohl’s is like a fast follower,” she said. “And I think it pays off for them because they learn from others. They see what they’ve done and then they jump on the bandwagon.”

As it is still relatively early in the game, there is some debate over how best to apply buy-online, pick-up-in-store.

Peterson, for one, believes retailers should make it as easy as possible for shoppers to pick up their purchases — perhaps delivering them curbside or at a kiosk in the parking lot.

“If somebody buys something online and they’re going to pick it up in the store, the last thing they want to do is go in,” he said.

But for many retailers, generating more foot traffic — and additional purchases — is critical.

A Target Corp. executive told analysts on a recent conference call that about 35 percent of customers picking up an online order in 2014 also shopped in the store on the same visit.

Still, that 20 percent might not have shopped otherwise on that day, and a higher traffic count in stores is a company goal.

And just to put the Amazon threat in perspective, it’s true that the digital retailer’s sales have soared. They’ve climbed from $34 billion in 2010 to $89 billion last year. Kohl’s over the same period went from $18.4 billion to $19 billion.

But retail in America remains overwhelmingly tied to brick and mortar. Ninety percent of sales in 2013 were in physical stores, an analysis by management consulting firm A.T. Kearney found. And of the 10 percent online share, half went to retailers that — like Kohl’s, Target, Best Buy and Wal-Mart — also operate physical stores.