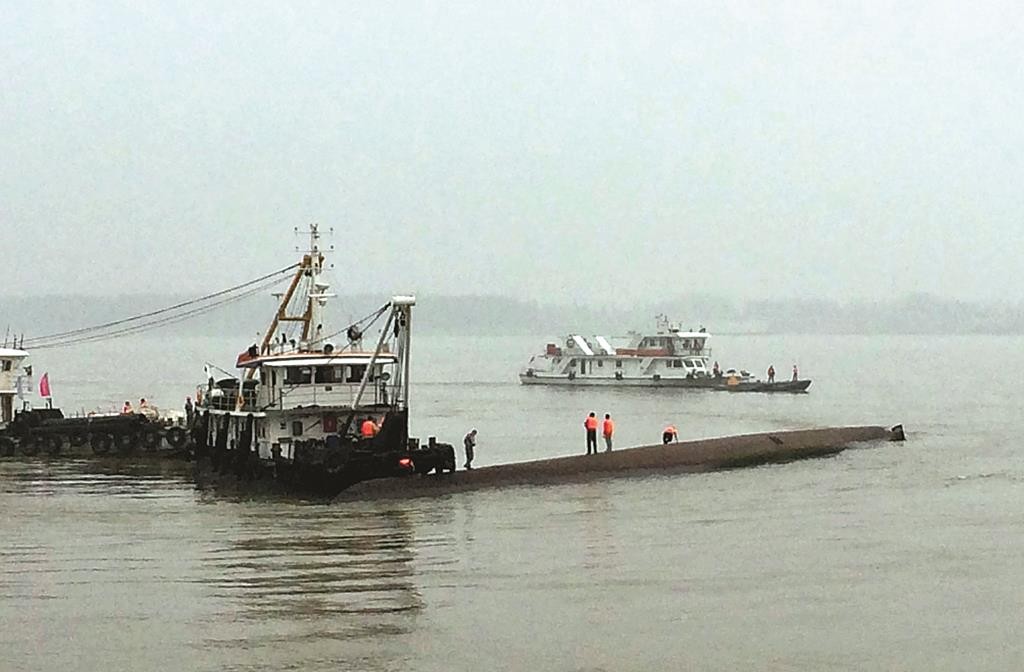 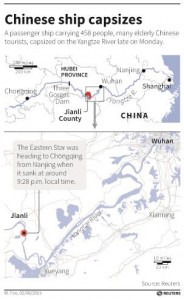 As the Eastern Star cruise ship listed heavily amid pounding rain on the Yangtze River, tour guide Zhang Hui told a colleague, “Looks like we are in trouble.”

The vessel capsized in the storm Monday night with 458 people aboard, touching off a frantic rescue effort. At least 15 people were brought to safety, including three pulled from the overturned hull Tuesday, and five people were confirmed dead, the official Xinhua News Agency reported.

The vessel was carrying mostly elderly tourists from Nanjing to the southwestern city of Chongqing when it overturned in China’s Hubei Province.

Divers rescued a 65-year-old woman and, later, two men who had been trapped, Chinese media reported. It said more people had been found and were being rescued, but did not say whether they were still inside the overturned hull.

“We will do everything we can to rescue everyone trapped in there, no matter [whether] they’re still alive or not, and we will treat them as our own families,” Hubei military region commander Chen Shoumin said at a news conference broadcast live on Chinese media.

The survivors included the ship’s captain and chief engineer, both of whom were taken into police custody, Chinese media said. Relatives who gathered in Shanghai, where many of the tourists started their journey by bus, questioned whether the captain did enough to ensure the passengers’ safety and demanded answers from local officials in unruly scenes that drew a heavy police response.

Xinhua quoted the captain and the chief engineer as saying the Eastern Star sank quickly after being caught in what they described as a cyclone. The Communist Party-run People’s Daily said the ship sank within two minutes.

Some survivors swam ashore, but others were rescued after search teams climbed on the upside-down hull and heard people yelling for help from within more than 12 hours after the ship overturned.