Business Walgreens Gets a European Makeover – or Is It a Takeover?
Business 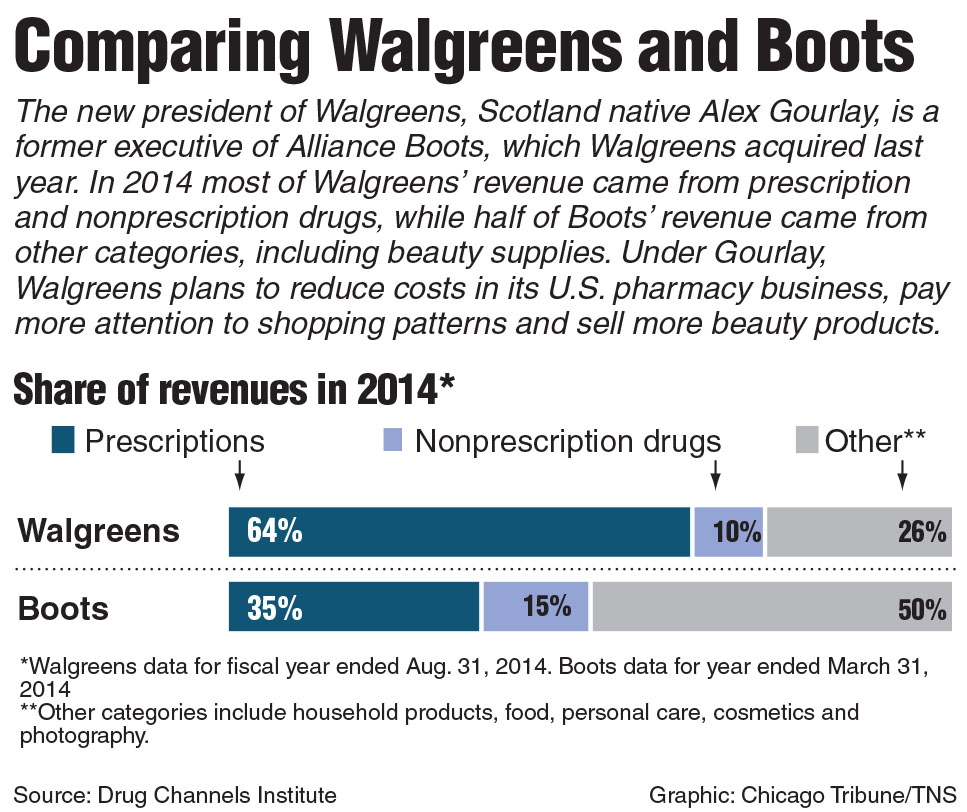 Walgreens, one of the oldest and most famous names in Chicago business, is undergoing a European makeover. Some would call it a takeover.

Scotland native Alex Gourlay, 55, is in charge of the drugstore chain’s nearly 8,300 stores across the country. The president of Walgreens is part of a new management team in the suburb of Deerfield, Ill., the company’s long-time headquarters, integrating the biggest acquisition in Walgreen’s 114-year history, Switzerland-based retailer Alliance Boots.

Under Gourlay, Walgreens plans to aggressively reduce costs in its U.S. pharmacy business by closing stores and removing layers of management, paying more attention to shopping patterns using data collected from its loyalty card and selling more beauty products. The changes are designed with one goal in mind, he says.

“Our desire is to be America’s most loved pharmacy,” Gourlay said in a thick Scottish accent.

It’s a telling comment that reflects a hard reality. Walgreens is no longer No. 1 in pharmacy volume, and hasn’t been since 2011.

Recapturing the former glory will be no easy task, company observers say. Walgreens faces tough competition in both its pharmacy and retail operations in the front of stores. But it has a lot of strengths, including a trusted brand, thousands of convenient locations and international scale.

Gourlay hails from Glasgow, an industrial city which, according to one travel guide, is the world’s friendliest. Indeed, Gourlay seems like the kind of man you would enjoying sharing a drink with.

Moving to America has been difficult, Gourlay admits, but coming to Walgreens was “quite easy.” Gourlay is a pharmacist by training, just like former Chief Executive Officer Greg Wasson. When he was 16, he started as a part-time clerk at Boots, the equivalent of Walgreens in the United Kingdom, doing whatever the pharmacist asked.

“I used to do the stockroom, mop floors, clean up after the drunks in Glasgow,” he said. “I can tell you some stories about that.”

Walgreens’ story in recent years has been disappointing for investors, or as Gourlay likes to say in his polite way, “Walgreens had lost a bit of its spark, a bit of its self-confidence.”

Previous senior management led by Wasson made a series of costly mistakes. For example, the company in 2012 picked a fight over reimbursement rates with pharmacy benefits manager Express Scripts that caused a big decline in prescription volume. Then, last year, Walgreens surprised investors with a warning that rising drug prices would hurt its results much more than they had anticipated.

Wasson engineered the deal with Alliance Boots, which became controversial last year when some activist investors and others pushed Walgreens to move its headquarters to Europe to cut its tax bill.

Wasson ended up rejecting the tax maneuver, but he’s not around to lead the combined company, Walgreens Boots Alliance. The company announced his departure just before the merger closed at the end of December. Stefano Pessina, the former head of Alliance Boots, is acting CEO and also the company’s largest shareholder.

In addition to Pessina, six other former Alliance Boots executives, including Gourlay, are on the 11-member senior management. The leadership suggests an Alliance Boots takeover of Walgreens, not the other way around, said Michael Pryce-Jones, director of corporate governance at CtW Investment Group, which represents union pension funds that own about 2.5 million shares of Walgreens. CtW opposed the merger.

“It’s hard to remember an acquisition where so many members of the management team turned over to the acquired company,” said Pryce-Jones. “It begs the questions of why Walgreens paid a premium for Alliance Boots. That’s a very expensive way to replace your management team.”

Wall Street, however, appears to be giving Pessina and his team the benefit of the doubt. Walgreens’ stock price has increased more than 10 percent so far in 2015.

But Gourlay has his work cut out for him, and he’s honest about it.

“In Europe, people are a bit more conservative, a bit more I would say pointing at the problems,” he said. “In Walgreens culture and American culture, there’s a lot more talking up things and not always recognizing the reality of the situation.”