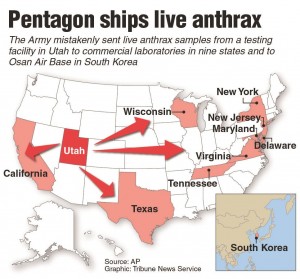 At least 26 people are being treated for potential exposure to deadly anthrax after an Army biodefense facility in Utah mistakenly sent live samples to private and military laboratories in as many as nine states and South Korea, officials said Thursday.

No confirmed infections were reported, and Pentagon officials insisted the accidental shipments of live Bacillus anthracis spores around the country and halfway around the world posed no risk to the general public.

The Pentagon said the 26 affected, including at least four civilians at U.S. commercial laboratories, are being given antibiotics and in some cases, vaccinations, as a safeguard.

The 22 others being treated are at a U.S. military laboratory at Osan Air Base in South Korea, where emergency response teams destroyed the anthrax sample. A joint U.S.-Korean program at Osan aims to boost biosurveillance capabilities on the Korean Peninsula.

The Centers for Disease Control and Prevention said it was working with state and federal agencies to investigate how the anthrax samples were sent from the Army’s Dugway Proving Ground, a vast facility in southwest Utah where researchers try to build and test defenses against chemical and biological agents, including viruses and bacteria.

The CDC said it had sent investigators to all the labs and was trying to determine if they all had received live samples. Officials said the facilities are in California, Delaware, Maryland, New Jersey, New York, Tennessee, Texas, Virginia and Wisconsin. They did not identify the specific labs.

This article appeared in print on page 3 of the May 29th, 2015 edition of Hamodia.