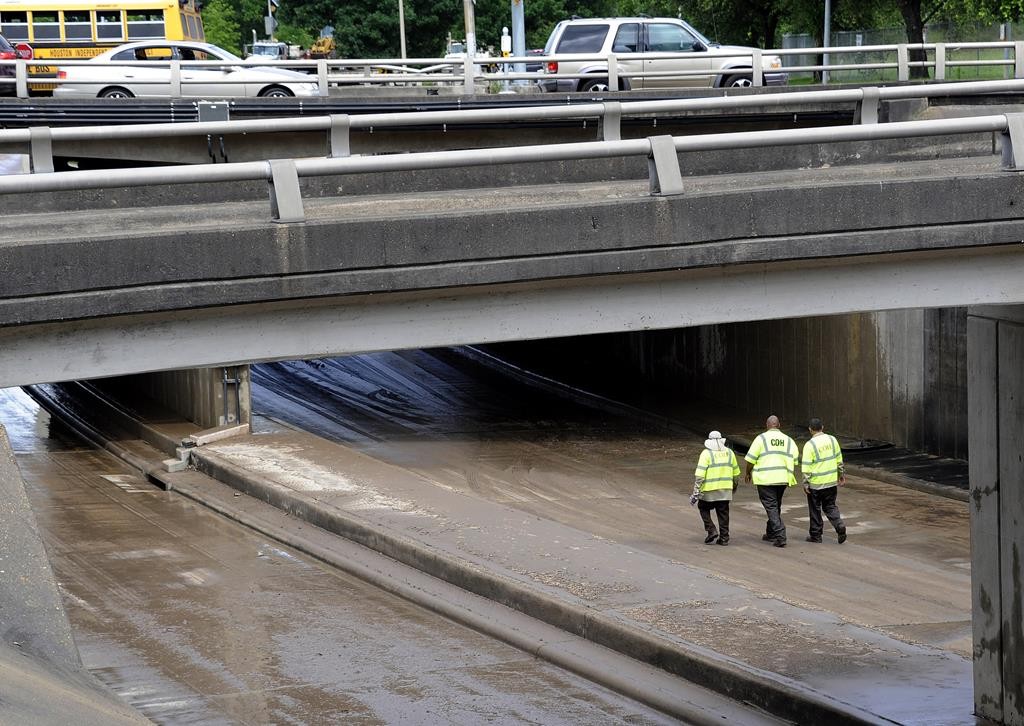 Homeowners dragged soggy carpet to the curb and mopped up coffee-colored muck Wednesday after a barrage of storms and floods in Texas and Oklahoma left at least 19 people dead and a dozen others missing.

More rain fell on the hard-hit Houston area, threatening to complicate the cleanup a day after a downpour of nearly a foot triggered some of the worst flooding the nation’s fourth-largest city has ever seen. Hundreds of homes were damaged.

Heavy weather continued in other parts of Texas, with hundreds of people west of Fort Worth told to evacuate along the rising Brazos River and flash flood warnings posted in many areas.

Gadi Shaulsky spent the day cutting wet carpet and padding from his home in Houston’s Meyerland section and taking it to the curb. His neighbors were doing the same. A water mark showed that up to six inches of water had seeped into the home.

Houston Mayor Annise Parker said two people whose boat capsized during a rescue were missing. Another person was missing in suburban Houston. And in central Texas, crews resumed the search for nine people feared dead after the swollen Blanco River smashed through Wimberley, a small tourist town between San Antonio and Austin, over the Memorial Day weekend.

This has been the wettest month on record for Texas, and there are still several days left. The state climatologist’s office said Wednesday that Texas has gotten an average of 7.54 inches of rain in May, breaking the old record of 6.66 inches set in June 2004.

Texas has been hit with almost continuous storms for the past week to 10 days. The wettest area has been from Dallas-Fort Worth to the Red River, where some places have gotten more than 20 inches of rain.

Authorities, meanwhile, defended their telephone and in-person warnings to residents ahead of the bad weather but acknowledged the difficulty in reaching tourists and said a messaging system in Houston is awaiting improvements.

“Nobody was saying, ‘Get out! Get out! Get out!’” said Brenda Morton of Wimberley. She said year-round residents know the risks, but “people who were visiting or had summer homes, you have company from out of town, you don’t know. You don’t know when that instant is.”

Wimberley saw some of the heaviest damage, including the loss of a two-story vacation home that was swept downstream and slammed into a bridge. Eight people in the home were missing, including three children.

In Houston, warnings from the National Weather Service were sent to mobile phones, but city officials said they haven’t installed a system that would allow them to give residents targeted warnings without the need to register.

The flooding in Houston affected virtually every part of the city. At least 2,500 vehicles were abandoned by drivers, and anywhere from 800 to 1,400 homes were damaged, officials said. The forecast was for two to three more inches of rain.

Thousands of homes were also damaged or destroyed in the central Texas corridor that includes Wimberley — 744 of them in San Marcos alone, said Kenneth Bell, emergency management coordinator for San Marcos.

The death toll climbed to 19 — 15 in Texas and four in Oklahoma. Houston alone had six storm-related deaths.

The deaths in Texas included a man whose body was pulled from the Blanco; a 14-year-old who was found in a storm drain; and a high school senior who died Saturday after her car was caught in high water.